Through its science and technology capabilities, Livermore makes fundamental discoveries about nature, develops innovative technologies that improve life and drive the economy, and carries out its mission to improve national security.

Quickly responding to the COVID-19 crisis, an LLNL team of engineers and scientists self-assembled to address the shortage of mechanical ventilators due to the COVID-19 pandemic. Working long hours with clinicians, doctors, and ventilator manufacturers, the team came up with two promising prototypes in the span of just two weeks. The selected option is a simple design for quick and easy assembly. It contains parts that are not being used by commercial ventilator manufacturers to avoid disrupting already thin supply chains. Under a quickly established Cooperative Research and Development Agreement, LLNL and medical device startup company BioMedInnovations (BMI) LLC produced several iterations of what would become BMI’s SuppleVent™. In early June, the U.S. Food and Drug Administration authorized the ventilator for emergency use. The suitcase-sized ventilator has a simple user interface and large LCD screen for monitoring pressures and air flow. It can operate in a continuous ventilation mode and can adapt to patients who spontaneously breathe on their own.

Combining high-fidelity computer simulations with ultra-high-speed x-ray imaging, researchers at LLNL devised a strategy for reducing defects in parts built through laser powder bed fusion additive manufacturing. This metal 3D-printing process produces a spatter of powder particles ejected from the laser’s path—potentially leading to pore formation and defects on the part. The team compared the results with virtual experiments using a “digital twin” of the process, which led to development of a scanning strategy that adjusts the laser’s power output along the path to improve overall part reliability.

Another Laboratory team developed a scalable method of nanoscale 3D printing up to 1,000 times faster than previous methods. The improved process, called femtosecond two-photon lithography (FP-TPL) potentially opens the door to cost-effective, large-scale 3D nanoprinting. With FP-TPL, the process is parallelized by using a broadband, ultrashort-pulsed laser, vastly improving throughput and enabling smaller feature size. The LLNL engineers produced the thinnest nanowires ever printed by any similar 3D-printing system—about 400 times finer than human hair. Machine learning was also applied to address monitoring of part quality during TPL printing and determining the right light dosage for a given material. The learning algorithm was trained on thousands of video images of builds to identify the optimal parameters for settings, such as exposure and laser intensity and to automatically detect part quality at high accuracy.

Material Dynamics at the Nanoscale

Simulations and experiments at the nanoscale provide Laboratory scientists insights into the dynamic properties of materials, contributing to scientific discovery and finding diverse mission applications. For example, an LLNL-led team performed atomistic simulations to find out how metals hardened when deformed. The exact root cause was unknown. Stretching the limits of supercomputer simulation capabilities, the team stressed 300 million atoms and watched their motion for tens of nanoseconds. They found that at all stages of the process, hardening is a direct result of crystal rotation under uniaxial strain. Other LLNL researchers took high-speed videos during the laser powder-bed fusion process to visualize the ductile-to-brittle transition in 3D-printed tungsten in real-time. They observed how microcracks initiated and spread in the metal. Tungsten is a popular choice for applications involving extreme temperatures; however, additive manufacturing with tungsten is challenging. The team is using the results together with simulations of the process to devise means to mitigate microcracking.

LLNL researchers and collaborators successfully obtained the first nanoscale video of copper deforming under extremely high strain rates, part of an Army-funded project aimed at designing next-generation armor. Combining a specially designed straining apparatus with LLNL’s Movie Mode Dynamic Transmission Electron Microscope, the researchers pulled apart copper samples at strain rates comparable to the impact of a bullet. With up to nine images in each experiment, they studied at the nanoscale the metal’s deformation as it happened. Another research team used atomic resolution scanning transmission electron microscopy to observe multiple grain-boundary structures in copper as they transform from one form to another. Grain boundary phase transitions open up new strategies to invent better materials.

A Livermore-led team was awarded Best Paper at the SC19 supercomputing conference in November 2019 for work sponsored by the DOE and the National Cancer Institute. A first-of-its-kind multiscale simulation predictively modeled the dynamics of RAS proteins—a family of proteins whose mutations are linked to more than 30 percent of all human cancers. Scalable to next-generation supercomputers, the Multiscale Machine-Learned Modeling Infrastucture built by the team simulates the interaction between RAS proteins and eight kinds of lipids on a macroscale, as well as on a molecular scale. Importantly, a machine-learning algorithm saves a vast amount of compute time by determining which lipid “patches” are interesting enough to more closely examine with micromodel simulations. Scientists ran nearly 120,000 simulations on the Sierra supercomputer, using 5.6 million general-processor-unit hours of compute time and generating a massive 320 terabytes of data. The macro-to-micromodel simulations allowed researchers to see how 300 different RAS proteins interacted on a cell membrane, generating data that can be tested experimentally to ensure the models are representative of actual biological results.

In addition, an LLNL–Duke University research team paired 3D bioprinting and computer modeling to examine cancer spread in blood vessels. Tumor cells tend to escape from a primary tumor and travel through the circulatory system. They eventually attach to the vascular endothelium (cells that line the interior surface of a blood vessel wall), spreading the cancer. LLNL researchers printed vasculature out of human cerebral endothelial cells, covering the walls of channels in a device. Breast cancer cells were then injected into the device to see how and where the tumor cells began to metastasize. The results were then compared to 3D computational simulations replicating experimental geometries, enabling accurate fluid dynamics analysis of the attachment conditions. 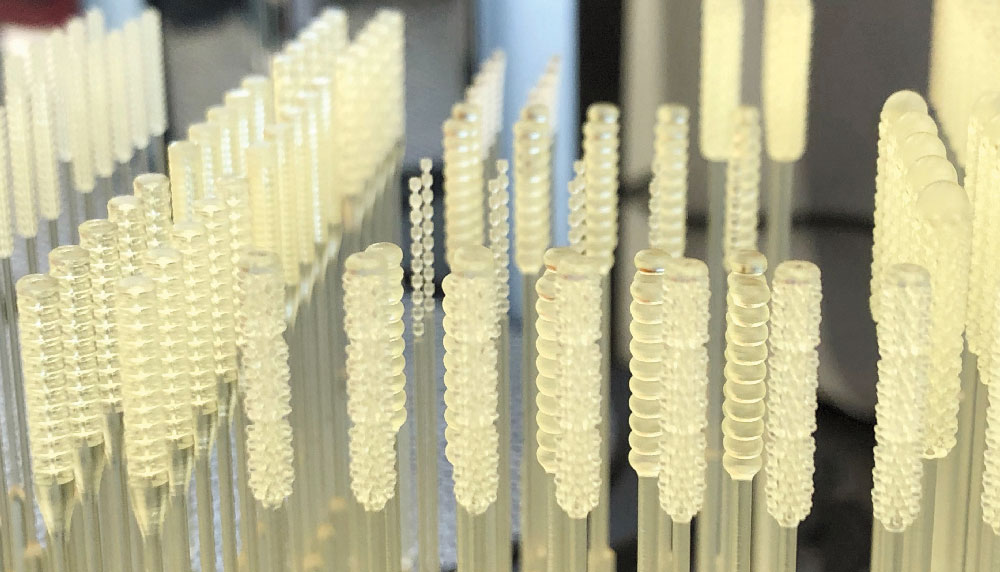 Responding to the National Shortage of Swabs

To address the national shortage of nasopharyngeal swabs, Laboratory engineers formed an ad hoc, rapid response team that has tested more than a dozen novel, 3D-printed nasal swab designs (hundreds of individual swabs) from a grassroots coalition of commercial and academic partners. The mechanical tests performed at LLNL—simulating how the swabs printed at the Advanced Manufacturing Laboratory might be used in a clinical environment—provided valuable feedback that improved the designs, enabling them to meet requirements for COVID-19 testing.

A Laboratory scientist and collaborators dated micrometer-sized silicon carbide stardust grains extracted from the Murchison meteorite. The team was surprised to find that some of the grains formed anywhere from 1.5 million to 3 billion years before the formation of our solar system. Stardust grains are the oldest datable solid samples available for laboratory study and provide invaluable insight into the presolar chronology of our galaxy. By analyzing these stardust grains for their nucleosynthetic signatures, scientists can probe the isotopic composition of the solar neighborhood more than 4.5 billion years ago, when it was a diverse place with stars at various evolutionary stages. Many of the parent stars of the grains were even more evolved than our solar system. In another LLNL-led study, the researchers considered the fundamental dichotomy in the isotopic composition (containing carbon or not) of meteorites and gained new insights into the dynamics and large-scale structure of the solar protoplanetary disk, the formation and growth history of Jupiter, and the delivery of water and highly volatile species to Earth.

Other LLNL scientists concluded that massive compressive shearing forces generated by the tidal pull of Jupiter-like planets on their rocky ice-covered moons may form a natural reactor that drives simple amino acids to polymerize into larger compounds. These extreme mechanical forces strongly enhance molecule condensation reactions, opening a new arena of possibilities for the chemical origins of life on Earth and other rocky planets. As a test case, the team focused on glycine, the simplest protein-forming amino acid found in astrophysical icy bodies, and developed a new computer modeling approach based on laboratory experiments. Above a certain pressure, every shearing simulation predicted the formation of large polymeric molecules and surprisingly complex chemistry.

Four of the world’s top 100 computer systems (according to the TOP500 list) are located at LLNL. Ranked No. 14 on the list, Lassen is now integrated with the 1.2 trillion transistor Wafer-Scale Engine chip—designed by Cerebras Systems specifically for machine learning (ML) and artificial intelligence (AI) applications. Through the support of NNSA’s Advanced Simulation and Computing Program, LLNL is the first institution to integrate this world’s largest computer chip with a large-scale supercomputer to support a radically new type of computing called cognitive simulation. The chip will greatly benefit early applications of cognitive simulation at the Laboratory, which include inertial confinement fusion experiments performed at the National Ignition Facility, material science studies, and rapid design of new prescription drugs for COVID-19 and cancer (through the Accelerating Therapeutic Opportunities in Medicine, or ATOM project).

Expertise in AI and ML is finding applications in many other program areas. For example, a team led by an LLNL computer scientist developed and applied a novel deep learning approach to improve the reliability of models designed for predicting disease types from diagnostic images (and provide a medical expert an accurate interpretation). Another interdisciplinary LLNL team is developing ML techniques to dramatically decrease the time and effort required to test and evaluate the performance of candidate materials such as TATB, an insensitive high explosive used in stockpile modernization. Yet another application is assisting early discovery of proliferation activities. In addition, two papers authored by Laboratory scientists and collaborators were presented at the 2020 International Conference on Machine Learning, one on uncertainty quantification and the other on meaningful text generation.

LLNL is benefiting the U.S. economy with innovative technology and methods. In FY 2020, LLNL obtained 198 new patents, asserted 78 new copyrights, and executed 80 new licenses. Licensing income for the year totaled approximately $4.6 million. Among many honors, LLNL earned an R&D100 award from R&D World Magazine and with this year’s results, the Laboratory has now captured a total of 170 R&D 100 awards since 1978. Working with an industrial partner, TTEC Thermoelectric Technologies, researchers developed the Versatile Cold Spray (VCS), a new technique for depositing on industrial parts with complex shapes a broad range of brittle and glassy materials, including functional materials such as thermoelectric devices, which transform heat into useful energy. LLNL researchers also won a national Federal Laboratory Consortium (FLC) award for Excellence in Technology Transfer for developing the IMPEDE® Embolization Plug that prevents continued blood flow to diseased vessels. In addition, LLNL received two FLC regional awards in 2020, bringing the total to 38 awards for technology transfer from the FLC since 2007. The creation of the Advanced Manufacturing Laboratory brought LLNL a Best in Class Award from the DOE Technology Transfer Working Group. 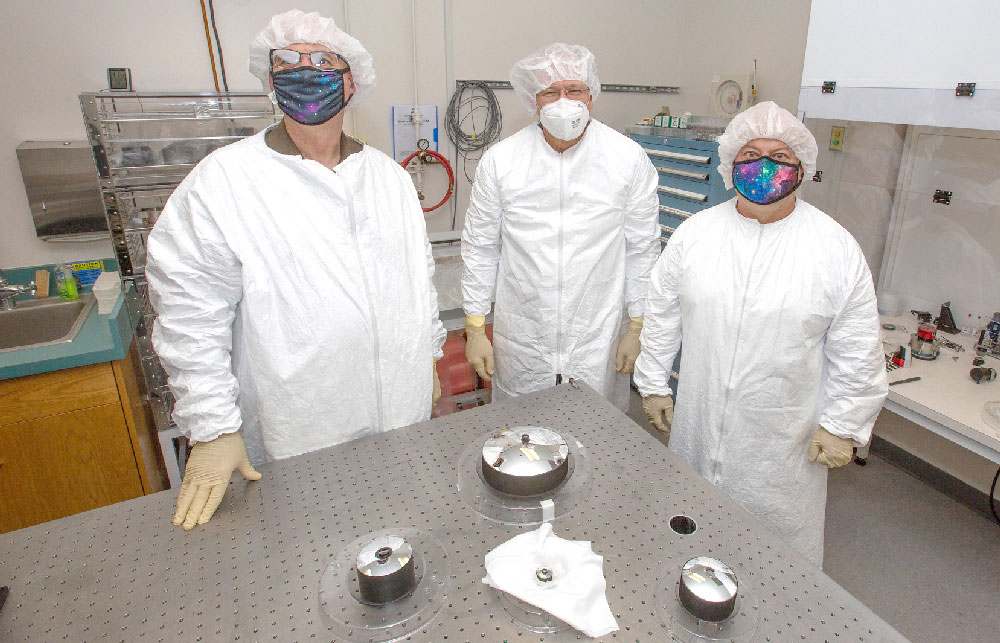 LLNL and Tyvak Nano-Satellite Systems Inc. have entered into a Cooperative Research and Development Agreement (CRADA) to develop innovative compact and robust telescopes for nanosatellites. The CRADA will combine LLNL’s Monolithic Telescope (MonoTele) technology with Tyvak’s expertise in producing high-reliability spacecraft. The MonoTele technology provides imaging for nanosatellites, about the size of a large shoebox and weighing less than 22 pounds, and microsatellites, about the size of a dorm refrigerator and weighing up to several hundred pounds.