Rapid Detection of Pathogens in Wounds and Emerging Viruses

Researchers from LLNL and four other institutions demonstrated that the Lawrence Livermore Microbial Detection Array (LLMDA) can detect bacterial pathogens in the wounds of U.S. soldiers. At least one bacterial pathogen was identified in about one-third of wound samples in which no bacteria were otherwise detected using the standard culture method. LLMDA contains 360,000 probes that are capable of detecting within 24 hours any bacteria or virus that has been previously sequenced. The current array version has probes for more than 10,000 species of microorganisms. More effective and timely diagnosis of infections in soldiers’ wounds could improve treatment, accelerate rehabilitation, and cut the length of hospital stays.

In another study, an international team of researchers from eight nations demonstrated a new rapid method that public health authorities could employ to conduct surveillance for emerging viral diseases. Using LLMDA and a DNA amplification technique developed by researchers from Denmark, the team correctly identified 29 different emerging viruses in both clinical and nonclinical samples. The disease symptoms for emerging viruses are often similar to those of more common viruses, so it is crucial to quickly identify the correct virus to contain a potential epidemic.

The Laboratory developed a software-based tool called Network Mapping Systems (NeMS) that provides system owners with a comprehensive view of their computer network environments. Understanding a system’s components and structure and their use is the first step in many cyberdefense and mission-assurance operations. The tool builds virtual maps based on observed behavior on the network and offers an interactive analysis platform. Cybersecurity and information technology personnel can then explore the maps generated. In one test, NeMS not only identified 100 percent of the network’s hosts but also discovered an unknown external connection. NeMS has been successfully deployed for Department of Homeland Security (DHS) at a U.S. government site through remote operation, saving time and travel costs. The software development project was supported by the DHS Transition to Practice Program, and the tool is now available for commercialization.

Laboratory scientists are applying nanotechnology to create military-grade clothing for protecting U.S. soldiers from chemical and biological attacks. Protection suits must also be breathable and lightweight. Working with academic partners, the researchers have produced a proof-of-concept patch of material that uses carbon nanotubes in a layer of the suit’s fabric. Sweat and air move easily through the nanotubes, but bacteria and viruses are too large in diameter to pass. Chemical agents are smaller, so one option to block them is to include a layer of polymer threads that extends up from the top of the nanotubes. The threads are designed to recognize the presence of agents, swell up, and block them from entering. This nano-based technology has many other possible applications such as temperature-smart blankets and clothing.

The Enhanced Radiological Nuclear Inspection and Evaluation (ERNIE) system completed a highly successful preliminary operational assessment at a U.S. port, where it properly classified every radiation alarm during four weeks of testing. The computer application uses machine learning and more than 100,000 scans to analyze data from radiation portal monitors (RPMs). ERNIE reduces false alarms by at least a factor of 10 while increasing sensitivity to nuclear threats. Unlike current RPM analysis systems, ERNIE uses all the data generated by the RPM—not just gross counts and the ratio of counts in specific energy windows—to provide an assessment of the most likely radioactive source type and location. 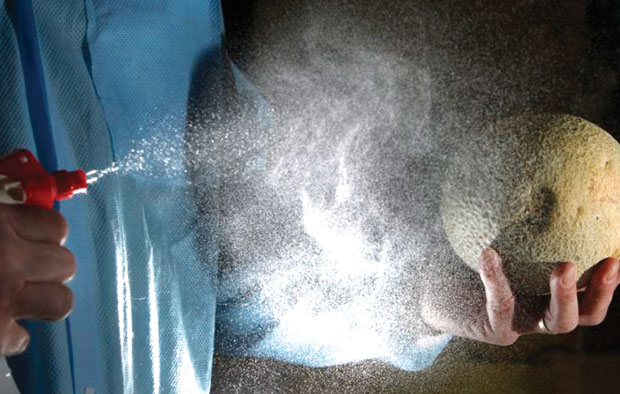 LLNL scientists and engineers developed a safe, odorless, and colorless barcoding material for biodefense applications. The technology has been licensed by DNATrek, which plans to use it as a way to determine where produce was grown, packed, or shipped. The material—called DNATrax—is made of sugar and synthetic DNA particles that are not visible to the naked eye but that can be read by a machine. The encoded information about the produce can then be used to quickly identify the source of contaminated food.

Laboratory researchers are at the forefront of developing and exercising methods of monitoring for nuclear tests, and we provide the Comprehensive Nuclear-Test-Ban Treaty Organization (CTBTO) with technical capabilities that support its mission to detect a nuclear test anywhere in the world. LLNL staff members served as task leaders and technical experts at the biannual technical Working Group B meeting held by CTBTO in Vienna, Austria, in February 2014. In addition, in November 2013, LLNL experts co-chaired the On-Site Inspection Workshop 21 held in Yangzhou, China, and a session at the International Noble Gas Experiment Workshop held in Vienna. LLNL experts were also members of the CTBTO Integrated Field Exercise 2014, held in Jordan. The Laboratory is engaged in supportive research to detect noble gases as post-detonation evidence of a clandestine nuclear test, and groundbreaking work on the Regional Seismic Travel Time Model for seismic monitoring earned Stephen Myers an E.O. Lawrence Award in 2014 (see Workforce Recognition).