LLNL scientists, together with academic colleagues, have developed a new, capsule-based technology to capture carbon dioxide (CO 2 ) using the same baking soda found in most grocery stores. Fossil fuel power generation and other industries could use these microcapsules to capture large quantities of CO 2 —a greenhouse gas—before it is released into the atmosphere. The microcapsules consist of a highly permeable polymer shell and a fluid (made up of sodium carbonate solution) that reacts with and absorbs CO 2 . Sodium carbonate only reacts with the gas of interest, unlike more caustic sorbents currently used in capturing CO 2 . The encapsulation approach dramatically increases absorption compared to traditional carbon capture techniques. Immobilized within the tiny high-surface-area droplets, the absorbent has much more contact with the CO 2 . After saturation, the capsules are removed from a power plant’s flue gas and heated to remove the now-pure CO 2 gas, which can be stored or used in industrial applications.

Assisting the State of California on Water Issues

LLNL is assisting the State of California in designing a groundwater-monitoring program for oil- and gas-well stimulation (i.e., hydrofracturing) operations in California. Recent legislation requires the State Water Resources Control Board to develop programs to monitor protected groundwater for impact from well stimulation at both the individual well scale and at the oil- and gas-field scale. The Laboratory provided expert advice on program design. LLNL experts collaborated with colleagues from Lawrence Berkeley National Laboratory and academia to prepare a set of recommendations on groundwater monitoring of well stimulation in California. The team delivered their final report to State Water Board staff in June 2015 and presented their findings at a State Water Board meeting in July.

Laboratory researchers are pursuing innovative approaches to combine the best features of two remarkable materials: carbon and aerogels. The marriage of carbon and aerogels—networks of sturdy, low-density nanoparticles—produces three-dimensional (3D) materials suitable for battery electrodes, catalyst supports, and other applications in the energy realm. LLNL’s focus is on two forms of carbon: (1) graphene, a single sheet of carbon atoms, and (2) carbon nanotubes, made of one or more graphene sheets rolled into a tube. With its long history in aerogel science, Livermore has adapted its aerogel synthesis techniques for new approaches to organize multiple nanotubes or sheets of graphene into functional 3D structures that have superior properties for energy applications. 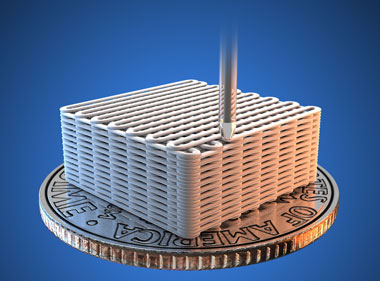 Additive manufacturing offers ways to build even better aerogels. The research aims to improve the quality of pore networks of graphene aerogels, which, until now, have had a fairly random structure. With an engineered structure, realized through 3D printing, these aerogels could achieve even better performance. LLNL has developed a printable graphene-based ink and adapted 3D printing methods to accommodate aerogel processing. Preliminary results are promising.

Livermore researchers have made graphene aerogel microlattices with an engineered architecture via a 3D printing technique known as direct ink writing. With 3D printing, one can intelligently design the pore structure of the aerogel and optimize physical properties, such as stiffness. 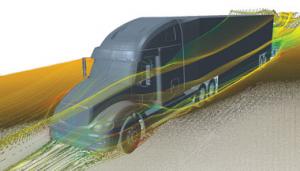 This computer simulation of aerodynamic drag on a tractor–trailer rig was conducted as part of a DOE study to reduce the fuel consumption of trucks.

A large interdisciplinary LLNL-led team concluded that the warming hiatus that occurred over the last 15 years has been caused in part by small volcanic eruptions. During this warming hiatus, global temperatures appeared to level off after the steep climb in global surface temperatures observed over the 20th century. Scientists have long known that volcanoes cool the atmosphere but have focused on large eruptions. Following publication of a paper that concluded that smaller eruptions contributed to the hiatus, Livermore led a study that substantiated this work and found that the eruptions deflected more solar radiation than originally estimated. Signs of late 20th- and early 21st-century eruptions were positively identified through atmospheric temperature, moisture content, and the reflected solar radiation at the top of the atmosphere. 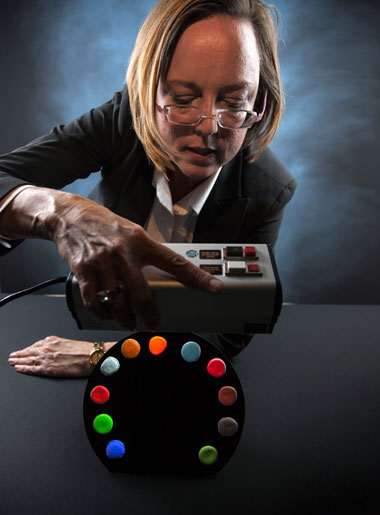 Researchers at LLNL, Oak Ridge National Laboratory, and General Electric have teamed up to create new kinds of fluorescent lighting phosphors that use far less rare-earth elements than current technology. The U.S. has access to a limited amount of rare-earth elements and relies on imports. The team identified new, low-cost phosphors that appear to be close to meeting stringent requirements of long lamp survivability, high efficiency, and precise color rendition. The team worked with the Critical Materials Institute at Ames Laboratory, and the work was funded by the DOE’s Office of Energy Efficiency and Renewable Energy.