Science and technology are central to addressing many of the most difficult problems of the 21st century and to understanding the world around us. Research using LLNL’s multidisciplinary scientific expertise and its world-class experimental and computational resources leads to exciting discoveries and innovative solutions.

Catalyst, a first-of-a-kind HPC cluster, serves as a proving ground for new HPC and “big data” technologies, architectures, and applications. Developed by a partnership of Cray, Intel, and LLNL, the Cray CS300 system is available through the Laboratory’s High Performance Computing Innovation Center for collaborative projects with industry and academia. The machine is specially designed for “big data” research, such as business-data analysis and the advanced sequencing of pathogen genomes. Innovations in data-intensive computing are critical to sustaining U.S. leadership in HPC. Catalyst also supports the Advanced Simulation and Computing program by providing insights into the technologies needed for next-generation nuclear weapons physics simulations.

Lawrence Livermore won four awards in this year’s R&D 100 competition. LLNL has received 152 awards since the competition began in 1978. The winning technologies are: a Portable Kit for Detecting Explosives and Drugs, a miniaturized thin-layer chromatography kit that can detect explosives, drugs, and other target substances in samples; the High-Precision Spectrometer for Identifying Trace Elements, a superconducting tunnel junction x-ray spectrometer that can identify unknown substances, such as forensic traces in crime-scene evidence and impurities in computer-chip materials; a Faster, Cheaper System for Polishing Laser Optics, which achieves the precision optics industry’s “Holy Grail” of convergence by polishing—quickly, economically, and in a single iteration—optics for imaging systems, lithography, and fusion research; and EXUDE, which allows beams from many small lasers to be combined into a single high-power beam, with applications in advanced defense systems and material processing.

Implantable Technologies for the Brain

The Laboratory is finding wide application for its innovative biocompatible neural interface technologies, which were first used in the artificial retina project. A widely recognized technological breakthrough, the artificial retina partially restores the vision of blind patients. LLNL is developing an implantable neural interface capable of recording and stimulating neurons in the brain to help treat conditions such as post-traumatic stress disorder, traumatic brain injury, and chronic pain. Researchers are also developing the world’s first neural device to restore memory loss caused by Alzheimer’s disease and other devastating disorders. The goal is an implantable device that stimulates neural tissues to bridge gaps in an injured brain. The implant will connect wirelessly to an external system worn around the ear.

Both of these projects are being performed for the Defense Advanced Research Projects Agency (DARPA) as part of President Barack Obama’s Brain Research through Advanced Innovative Neurotechnologies (BRAIN) Initiative. BRAIN aims to find revolutionary new ways to treat and prevent brain disorders. LLNL is also developing an implantable electrode array system to study how neurons in various brain regions work together during decision-making and other complex tasks. More than 1,000 tiny electrodes will be embedded in different areas of the brain to stimulate neural circuitry and record its activity.

A team from Lawrence Livermore and the Massachusetts Institute of Technology engineered materials that are light yet strong enough to withstand loads 160,000 times their own weight. These materials could profoundly impact industries such as aerospace and automotive. They feature a complex microstructure made possible by 3D printing, an additive manufacturing technique for depositing material and creating the structure one thin layer at a time. The team published its achievement in the journal Science. LLNL researchers were also the first to use direct ink writing to create highly flexible, stretchable 3D structures. These lightweight, energy-absorbing materials are “printed” in alternating layers of horizontally and vertically aligned filaments. They could be used to cushion sensitive instrumentation or to protect against extreme temperature changes and vibrations. LLNL’s advances in additive manufacturing are benefiting the Stockpile Stewardship Program (see Nuclear Deterrence).

Laboratory researchers also developed a new technique, called light-directed electrophoretic deposition (EPD), to dynamically coat a large surface area in fine resolution with multimaterial composites in an arbitrary 3D pattern. For nearly a century, EPD has been used to coat material onto surfaces, for example, applying a primer coat to a new car body on a production assembly line. Until now, this tried-and-true process could only deposit material across the entire surface and not in specific, predetermined locations.

A “Molecular Movie” of Photosynthesis

An international team including LLNL researchers successfully captured, for the first time, the structural changes triggered by light in one of the two large protein complexes responsible for photosynthesis. The team used the world’s most powerful x-ray laser—the x-ray free-electron laser at the Linac Coherent Light Source—to perform femtosecond crystallography of the proteins. From the resulting time-resolved data they determined the molecular structures of the complexes in their dark and light-affected states. This work, which shows the tremendous potential of time-resolved femtosecond crystallography for investigating biomolecular processes, was published in the journal Nature. 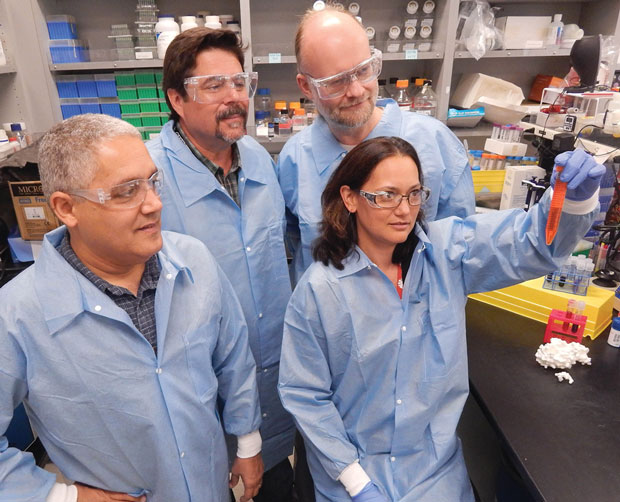 A Patent to Fight Superbugs

LLNL scientists (front row left to right) Matt Coleman, Feliza Bourguet, (back row left to right) Brian Souza, and Patrik D’haeseleer have figured out a way to develop novel antibiotics that effectively kill superbugs. They were recently issued a patent for producing antimicrobial compounds that degrade and destroy antibiotic-resistant bacteria by using the pathogen’s own genes against it. Their approach can be used to fight superbugs such as antibiotic-resistant E. coli, Salmonella, Campylobacter, Methicillin-resistant Staphylococcus aureus (MRSA), Bacillus anthracis, and many others.

A decade of Livermore-led multi-institutional effort came to fruition when the world’s most advanced instrument for directly imaging planets orbiting stars other than our Sun saw first light in FY 2014. The Gemini Planet Imager (GPI)—installed on the Gemini South telescope in Chile—immediately began generating stunning images almost a factor of 10 better than the previous generation of instruments. Key to the imager’s performance is an LLNL-designed adaptive optics system. The Laboratory pioneered the field of adaptive optics, which compensate for turbulence in Earth’s atmosphere to enhance image clarity far beyond what would otherwise be possible with Earth-bound telescopes.

A single chip combining living human cells with tissue engineering and microfluidics technology, the In Vitro Chip-based Human Investigational Platform (iCHIP) aims to reproduce the human body’s responses when subjected to drugs, toxins, and other external factors. This “human-on-a-chip” could dramatically speed up development of new pharmaceuticals and countermeasures to biological threats. In FY 2014, the iCHIP team demonstrated human cell response to a surrogate chemical. They also successfully cultured rat neurons on the device for three weeks. These achievements support two key goals needed to make iCHIP-based research a reality: using living human cells as an accurate surrogate for the human body and sustaining those cells for long periods.

An international team of astrophysicists using NASA’s Nuclear Spectroscopic Telescope Array (NuSTAR)—for which Livermore did important optics design and testing—advanced our understanding of how stars explode in a supernova. NuSTAR mapped emissions from the decay of titanium-44 in the supernova remnant Cassiopeia A. Published in the journal Nature, the team’s findings confirm that the original star’s explosion was not smoothly spherical and suggest extensive convective motions in the star before detonation.

In addition, LLNL researchers and a colleague at Arizona State University examined calcium–aluminum-rich inclusions in meteorites, which are among the first solids to form in our solar system. The inclusions were found to exhibit highly different isotopic signatures than younger rocks from Earth, Mars, or the Moon. This research suggests that a supernova sprinkled elements into our solar system after the inclusions had formed—indicating that the solar system grew up in “a rough neighborhood.”

Livermore scientists have made a dramatic advance in the method of sample preparation for biological accelerator mass spectrometry (AMS). Biological AMS is a technique in which carbon-14 is used as a tag to study, with extreme precision and sensitivity, complex biological processes, such as cancer, molecular damage, drug and toxin behavior, and nutrition. The new sample-preparation method accommodates liquid samples (rather than graphite) that can be prepared and analyzed in minutes instead of days.

LLNL serves as a National Institutes of Health center for biological AMS. In one project in FY 2014, the capability was used to study unruptured cerebral aneurysms—a potentially life-threatening condition for millions. Researchers found the arterial bulges to be younger than previously thought, suggesting that they alternate between periods of stability and instability. Overturning decades of assumptions about aneurysms, the findings were featured on the cover of the journal Stroke.

LLNL researchers have developed a computational technique to identify proteins that cause medications to have certain adverse drug reactions. Side effects are difficult and expensive to determine as pharmaceuticals are being developed, and if undiscovered prior to a drug’s release, pose a major public health risk. The method combines HPC with information from public databases of drug compounds and proteins. The effectiveness of molecular docking was scored for interactions between 906 drug compounds approved by the Food and Drug Administration (FDA) and 409 candidate proteins that have experimentally well-characterized structures. These binding scores were fed into another program and combined with 560 FDA-approved drugs with known side effects. The comparisons allowed researchers to determine which proteins were associated with certain side effects and better predict potential side effects earlier in the drug development process.

LLNL’s High Performance Computing Innovation Center (HPCIC) is serving as an effective vehicle for outreach to industry and the academic community. The center is located at the Livermore Valley Open Campus, a partnership between LLNL and Sandia National Laboratories–California. HPCIC, as an example, held a technology symposium, hosted by the Silicon Valley Forum, that showcased the Laboratory’s capabilities in additive manufacturing. Topics included hardware, enabling materials-science research and development, and application of HPC. In FY 2014, the Laboratory also became a corporate partner of i-GATE, a new startup incubator located in downtown Livermore and launched to connect entrepreneurs to game-changing technologies produced by LLNL and others.