Livermore’s scientific and technological research provides benefits to society that range from better materials for advanced products to innovative biomedical solutions for human health and a better understanding of the universe we live in.

Livermore researchers delivered to the European scientific community the High-Repetition-Rate Advanced Petawatt Laser System (HAPLS), designed to deliver 10 pulses per second, each 30 quadrillionths of a second long with greater than 1 petawatt peak power. As the world’s highest average-power laser, HAPLS is a major advancement over today’s petawatt lasers, which cannot fire more often than once per second. The system incorporates many breakthrough technologies, including the use of laser diodes as flashlamps to reduce system size and power requirements. HAPLS will be a key component of the European Union’s new Extreme Light Infrastructure (ELI) Beamlines facility, where the international scientific user community will study laser–matter interactions. The laser pulses are of such intensity (up to 1023 watts per square centimeter) that HAPLS makes possible new investigations into atomic physics, time-resolved proton and x-ray radiography, nuclear physics, high-energy-density physics, plasma physics, chemistry, biochemistry, and medicine.

Livermore is taking delivery of the Sierra supercomputer (see Nuclear Deterrence). Laboratory researchers have been preparing for it and looking ahead to exascale computing (1018 floating-point operations per second). In FY 2017, DOE’s Exascale Computing Project (ECP) awarded funding for 35 software development projects. LLNL computer scientists lead six of the projects and are collaborators on another seven. Livermore was also one of four national laboratories selected to lead an ECP co-design center. These co-design centers focus on selected exascale hardware–software issues. LLNL’s Center for Efficient Exascale Discretizations addresses a key challenge in developing next-generation algorithms for large-scale applications so that they run efficiently on exascale platforms.

A team of LLNL computer scientists successfully met the challenge of dramatically enhancing the performance of first-principles molecular dynamics computer simulations. With the improvement, computing time scales linearly with the number of molecules (N) rather than a higher power of N. The team’s “Computing More than a Million Atoms with over a Million Cores” project was a finalist for the 2016 Gordon Bell Prize. The technique, which opens the door to simulating systems of a size and complexity previously impossible, has broad application in chemistry, physics, materials science, biology, and medicine.

The Accelerating Therapeutics for Opportunities in Medicine (ATOM) Consortium unites Livermore, the Frederick National Laboratory for Cancer Research, pharmaceutical manufacturer GSK, and the University of California at San Francisco in a new discovery process for cancer medicines. ATOM’s goal is to reduce the time from identifying a drug target to developing a clinical candidate. The typical time is 6 years, but ATOM is working to shrink this cycle to 12 months. ATOM will integrate high-performance computing (HPC), data science, and artificial intelligence into a single drug discovery platform.

Scientists are increasingly using HPC to improve not just drug discovery, but healthcare in general. Laboratory and Norwegian researchers are cooperating to analyze Norway’s database of 1.8 million cervical cancer screening results covering 25 years from the Cancer Registry of Norway. The country’s screening program is a linchpin of its efforts to reduce cancer incidence. Using pattern recognition, machine learning, and statistical analysis, the research team will focus initially on improving risk assessment and the screening recommendations for individual women, moving healthcare toward an era of personalized medicine. 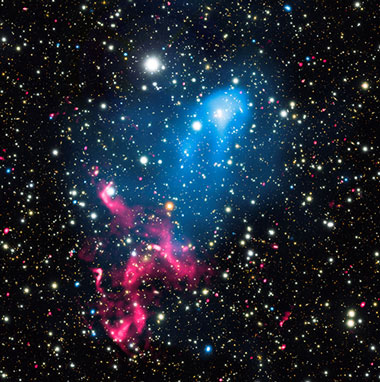 Through experiments, simulations, and observations, Laboratory researchers take part in astonishing discoveries about objects and events in our universe. In addition to the Discovery Science experiments at the National Ignition Facility (see NIF ), LLNL scientists probe high-energy-density astrophysical phenomena at other facilities, such as the Linac Coherent Light Source (LCLS) at the SLAC National Accelerator Laboratory. As part of an international team, they used LCLS to generate a “diamond rain,” which is theorized to exist within slushy high-pressure interiors of planets such as Uranus and Neptune. They watched carbon forming into nanodiamonds in real time under extreme pressures, a phenomenon they theorize is an everyday occurrence on the gas giant planets, where diamonds within the rain may grow to visible size. Another team, led by a researcher from Colorado State University, used compact lasers at LLNL’s Jupiter Laser Facility to re-create conditions that exist inside stars. The ultra-high-density matter was formed by irradiating arrays of aligned nanowires with intense ultra-short laser pulses.

Livermore scientists and colleagues also apply HPC to astronomical discovery. To assist in the search for moons around planets of other star systems, one Livermore-led team has simulated the formation of moons from collisions of planetary bodies to determine what factors affect exomoon formation. They found that a collision between like-sized objects, each two to seven Earth masses, could launch enough mass into orbit to form a moon that could be detected by the Kepler spacecraft. LLNL scientists have also simulated the formation of the giant crater on the surface of Phobos, one of Mars’ moons, and estimated the impacting body’s size and speed. 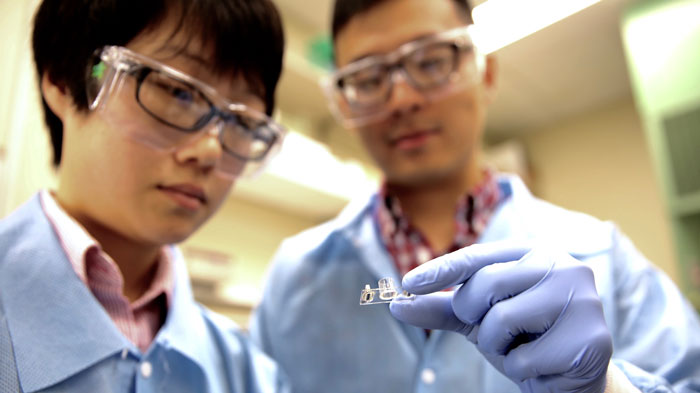 Researchers Fang Qian (left) and Chao Huang hold LLNL’s “heart-on-a-chip.” They successfully recorded both electrical signals and cellular beating from normal human heart cells grown on the multi-electrode array. The goal is to decrease the time needed for new drug trials and ensure that potentially lifesaving drugs are safe and effective. The research is part of the Laboratory’s iCHIP (in-vitro chip-based human investigational platform) project.

With 3.4 billion people connected to the Internet and that number growing, telecom companies are searching for ways to increase Internet bandwidth as rapidly and inexpensively as possible. A Livermore team has developed a fiber-optic amplifier that could potentially double the information-carrying capacity of existing fiber-optic cables.

Most of the bytes moving over fiber-optic cables travel on lasers operating at a wavelength of 1,550 nanometers (nm), amplified by inline optical amplifiers. The Livermore team discovered a new fiber capable of amplifying at the 1,330-nm laser wavelength, while suppressing interfering signals at other wavelengths. At 1,330 nm, the new fiber shows significant optical gain with good efficiency—possibly allowing telecoms to double the transmission rate on their existing installed base of fiber-optic lines. Use of the new fiber could eliminate the huge cost of digging new tunnels and laying more cable.

Livermore scientists are at the forefront of developing additive manufacturing (AM) technologies. Manufacturing parts by 3D printing means components can be designed, prototyped, and manufactured more rapidly and at lower cost than by conventional manufacturing. In FY 2017, LLNL researchers showed they could produce transparent glass by 3D printing aroom temperature a “slurry” of silica particles and treating it. Since high-resolution features can be printed with the new process, high-quality optics and lenses could also be created by varying the composition of the glass. In addition, a Laboratory team demonstrated that 3D printing can be used to manufacture parts made of aerospace-grade carbon fiber composites, a material used in the aerospace, defense, and automotive industries, as well as in vehicles for sports and outdoor pursuits. Another team created a composite silicone material with “shape memory”—a 4D material that can be manufactured to assume an alternate shape when heated.

Livermore is also reinventing metal 3D printing processes. Metal 3D printing has enormous potential to revolutionize modern manufacturing. However, the most popular process, which uses lasers to fuse together fine metal particles, has limitations. LLNL scientists have combined ultrafast imaging of the melting process with high-resolution simulations to reveal an important cause of the defects in printed parts and are studying ways to improve it based on an understanding of the underlying physics. Another team is exploring the use of high-powered laser diodes to speed up the metal printing process. Yet another team is taking a new approach to 3D metal printing: direct metal writing, in which semisolid metal is directly extruded from a nozzle. 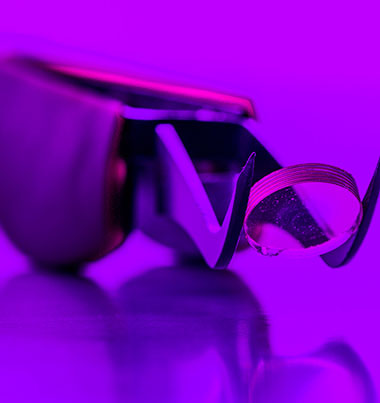 A new 3D printing technique, developed at the Laboratory, could allow scientists to print glass that incorporates different refractive indices in a single flat optic, making finishing cheaper and easier.

A Focus on Carbon Nanotubes

Carbon nanotubes (CNTs)—nanoscale hollow tubes formed from cylindrical sheets of carbon—are of great interest to Laboratory scientists. They have unusual strength, stiffness, thermal and electrical conductivity, and other properties that are applicable to many LLNL mission areas—from advanced materials for energy and environmental security to biosecurity and biomedicine. Work published by Livermore scientists in FY 2017 showed that a type of nanomolecular channel, the carbon nanotube porin (CNTP), can mimic the behavior of lipid membranes in cells. They demonstrated that CNTPs can act as pores by inserting themselves across sheets of lipid membranes, providing an artificial channel through which water molecules, ions, and protons—all important to various living processes—can pass. Using high-speed atomic force microscopy, they were able to image the motion of CNTPs in real time.

To better understand how to synthesize CNTs that are customized for special applications, LLNL scientists also conducted experiments to directly visualize the structure, growth, and self-organization of CNT sheets. Using an environmental transmission electron microscope, they made a movie of CNTs growing and aligning themselves. Another team used synchrotron x-ray scattering to map the hierarchical structure of CNTs across four orders of magnitude in length. The work has direct application to ongoing efforts developing carbon nanotube membranes as a material for breathable garments that protect against biological agents.

The Applied Biosystems Axiom Microbiome Array is the commercially licensed version of the Lawrence Livermore Microbial Detection Array, which is capable of detecting 3,000 bacteria and viruses within 24 hours for diagnosing diseases, as well as 26,000 other microorganisms, some of which are pathogenic. The Radiation Field Training Simulator is an instrument that provides realistic training for first responders protecting against radiological or nuclear attacks by replicating the physics of radiation hazards. The ESGF system has transformed Earth data into community resources available within a virtual, collaborative environment. ESGF links climate centers and users around the world to models and data via a computing grid powered by the world’s high-performance computers. 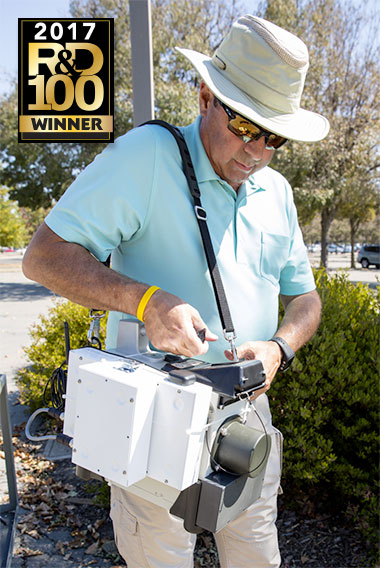 LLNL is benefiting the U.S. economy with innovative technology and methods.In FY 2017, the Laboratory filed 99 new patent applications, received 105 new copyrights, licensed 35 unique inventions, and 10 authored works. Licensing income for the year totaled about $6.2 million. Entrepreneurial Livermore researchers are benefiting from the DOE’s Technology Commercialization Fund (TCF). Six awards to LLNL were among the selections announced by DOE Secretary Rick Perry in September 2017. The grants ranged in size from $150,000 to $750,000, with matching funds coming from nonfederal money. For the largest grant, LLNL will be integrating the ParGrid platform with a leading power management company’s commercial distribution simulator and LLNL’s open-source GridDyn transmission simulator. Developed by Livermore researchers, ParGrid is used to perform coupled transmission and distribution analyses. The study will focus on the electrical grid of the future.