LLNL is committed to the highest level of performance in the areas of environment, safety, and health (ES&H) and security. Best practices are implemented throughout the Laboratory and management systems provide for continuous improvement. The safety of employees and the public is ensured through prudent risk management coupled with active measures to prevent accidents.

The Laboratory’s injury and illness statistics continue their long-term downward trend. The FY 2014 total recordable case (TRC) rate of 1.1 continues the prior year’s excellent performance and represents a 54 percent decrease since the contract transition in 2008. More significantly, the days away, restricted, or transferred (DART) rate, which is a measure of the severity of injuries, continues to improve to 0.34 and is down by more than 65 percent over the same time period.

Injury and illness reduction goals were met in FY 2014 through continued emphasis on attention to safety and concerted efforts to improve performance in high-risk areas, including facilities and infrastructure operations and protective services. The Laboratory’s safety culture was further strengthened by implementing five recommendations and 14 actions proposed by an After-Action Team. The team was formed following the DOE Safety Conscious Work Environment Self-Assessment, which LLNL completed in 2013.

As part of its continual improvement efforts, the Laboratory is undertaking a project to enhance work planning and control (WP&C) in response to incident assessment recommendations and worker feedback. Project plans were created in FY 2014 for taking a strategic approach to address a number of identified issues. Baseline requirements for a new WP&C system have been set, and working groups are developing WP&C processes, controls, and concepts for implementation.

On Track Toward Site Sustainability Goals

LLNL is on track toward meeting ambitious site sustainability goals to reduce fossil-fuel consumption, energy intensity (the energy consumed per square foot of office space), and emissions while acquiring a greater percentage of consumed energy from renewable sources. For example, LLNL has already achieved its FY 2020 goal for reducing greenhouse-gas emissions by 28 percent, and renewable sources provide 17 percent of LLNL’s electrical power, with a goal of 20 percent by 2020. A planned 3-megawatt solar photovoltaic system at the Livermore site will help meet the target.

Goals are also in place for reducing water consumption. In view of California’s severe drought, water conservation is a critical task, and LLNL cut usage by about 20 percent in FY 2014. Nearly half of the Laboratory’s water consumption is directed toward cooling towers for operating high-performance computers and equipment in other research facilities. A reverse-osmosis pilot plant, which began operations in FY 2014, cleans treated groundwater to render it usable in a cooling tower and reduces the need to purchase potable water. Other water consumption is split between domestic use and landscape irrigation. The Laboratory’s Sustainable Landscape Concept Plan developed in 2011 and the application of innovative water-conservation technologies enhanced reduction efforts.

In FY 2014, LLNL’s Emergency Programs Organization tested its capabilities with a “severe emergency response” drill and exercise scenarios that entailed multiple, simultaneous events; hazardous material releases; and loss of primary communications systems. Skills in disaster “self-help” were also exercised. The Laboratory established a Community Emergency Response Team (CERT) program based on the U.S. Federal Emergency Management Agency CERT Program. LLNL CERT, which consists of volunteer employees, supports the emergency response organizations and the LLNL population after a disaster or severe event. The team received eight weeks of special training to enhance its ability to recognize, respond to, and recover from a disaster by offering immediate help to victims as an extension of local first responder services. 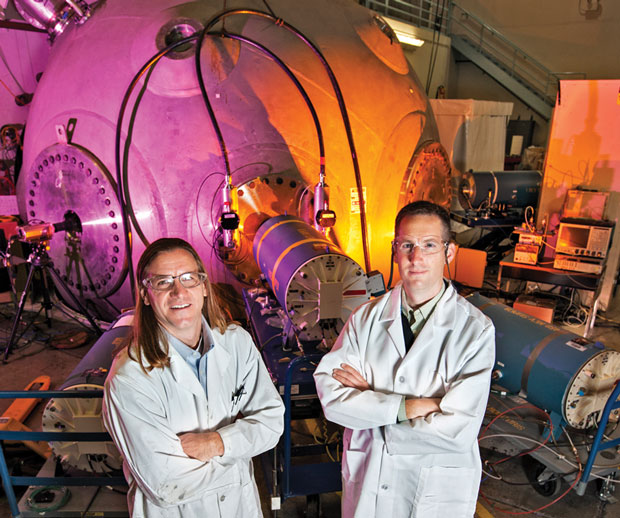 25 Years of Safe Operations at HEAF

LLNL’s High Explosives Applications Facility (HEAF) celebrated its 25th anniversary this year. An NNSA Center of Excellence, HEAF is the only facility of its kind. It combines in one location all of the various disciplines and work areas critical to high-explosives research and development. Safe operations are paramount at the firing operations area and at chemistry laboratories for synthesis, formulation, characterization, and testing of energetic materials. HEAF includes seven fully-contained firing vessels, including one (shown) with a firing capacity of up to 10 kilograms net explosive weight.

The Laboratory efficiently and effectively maintained secure operations in FY 2014. The Security Organization met all milestones on or ahead of schedule and completed DOE Office of Enterprise Assessments and other inspections with positive outcomes. Security police officers were provided with upgraded training capabilities and received enhanced training on Protective Force authorities. Cybersecurity enhancements included implementing a Risk Management Framework (RMF) for classified systems. RMF moves the security structure from a compliance-based architecture to one that allows LLNL to make risk-based decisions.