LLNL played a leading role in fielding Source Physics Experiment-4 Prime (SPE-4 Prime), detonated at the Nevada National Security Site (NNSS). The test, conducted in May 2015, is the fourth in a series of underground, high-explosive field tests in hard rock. The SPEs provide data to improve capabilities to detect and identify low-yield nuclear explosions amid the clutter of conventional explosions and small earthquakes. LLNL engineers and technicians designed the canister that contained the explosive charge, emplaced the canister downhole, and fired the shot. The instrumentation yielded extensive information, including high-resolution accelerometer, infrasound, seismic, explosive performance, ground-based light detection and ranging (LIDAR), ground-based hyperspectral imagery, and satellite data. Results will enable researchers to advance ground motion and seismic wave propagation models and algorithms toward a predictive capability. The SPE tests partner NNSS and the Los Alamos, Lawrence Livermore, and Sandia national laboratories with the Department of Defense’s Defense Threat Reduction Agency and the University of Nevada at Reno.

Livermore staff participated in the planning and execution of the Comprehensive Nuclear-Test-Ban Treaty (CTBT) Integrated Field Exercise (IFE), which took place on the eastern shore of the Dead Sea in Jordan in late 2014. The purpose of the exercise was to testthe current state of on-site inspection capability todetect signatures related to a possible undergroundnuclear test explosion within a 1,000 square-kilometer area. Supported by staff from LLNL and other national laboratories, the Preparatory Commission for the CTBT Organization worked for several years to develop the exercise scenario and plan its execution. The five-week exercise involved more than 200 participants, including seven scientists from LLNL who served as subject matter experts and role players. Several Livermore technologies were used to identify radioactive isotopes,including an in situ gamma-ray measurement instrument, and the LLNL-developed backpack and car-borne radiation detectors. In addition, the Laboratory’s Smart Sampler system provided an effective means for collecting samples to test for subsurface noble gas emissions that would be indicative of a nuclear test.

Preparing for the Worst

LLNL is helping the Federal Emergency Management Agency (FEMA) and other Department of Homeland Security agencies understand what to expect in a disaster such as detonation of an improvised nuclear device (IND) or dispersal of a toxic chemical. While the probability of such events are low, they are high-consequence situations in which many lives could be saved with appropriate planning. Detailed simulations of potential events show officials—and the public—what to prepare for in the first critical minutes and hours after a disaster. A valuable lesson learned from the research is the importance of sheltering in place after an IND detonation with later evacuation once fallout is reduced.

The analyses build on the capabilities of Livermore’s National Atmospheric Release Advisory Center (NARAC), which provides real-time assessments of dispersion and deposition of radioactive and other toxic materials based on state-of-the-art computer simulations coupled with actual meteorological, geographical, and material property data. Researchers have developed and validated simulation models that include complex urban landscape features, as detailed as individual buildings, which affect wind patterns. NARAC provided indispensable support to FEMA’s Southern Exposure 2015 exercise in July. It was the first full-scale field exercise of response to a nuclear power plant accident in more than a decade.

The Laboratory’s iRADAR system, which is able to detect underground improvised explosive devices (IEDs) in real time, was evaluated in a counter-IED demonstration at Fort A. P. Hill, Virginia, where it received high marks in all assessment areas. The LLNL team mounted the iRADAR unit onto an autonomous version of a Marine Medium Tactical Vehicle Replacement seven-ton truck. The radar system provides a highly reliable autonomous decision to stop the vehicle and any trailing convoy on detection of an IED. The work was funded by the Office of Naval Research/Naval Surface Warfare Center (ONR/NSWC), which is pursuing technology to support operations of Marine Expeditionary Units.

For the sixth year, LLNL brought a diverse group of 38 paid summer interns to the Laboratory as part of the Cyber Defenders Program. Participants—ranging from high-school students to faculty members—received frontline training in cyberdefense and developed skills in intrusion detection and prevention, network monitoring and analysis algorithms, anomaly detection, and machine learning. The experience opened up exciting career opportunities for the interns to contribute to our nation’s security. Nearly a dozen former interns are currently Laboratory staff members working on cyberdefense projects. 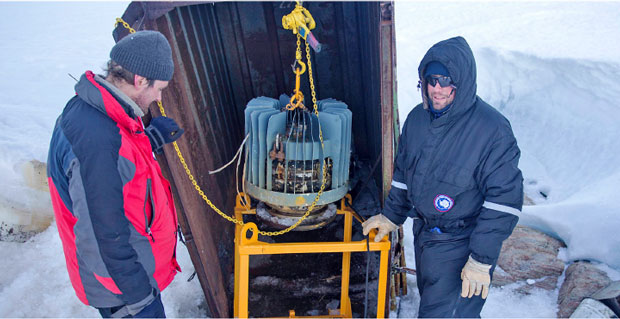 An Expedition to Antarctica

Global threat reduction efforts took an LLNL team to Antarctica, where they supported recovery of four Russian radioisotope thermoelectric generators (RTGs) containing special nuclear materials. The complex undertaking was managed for NNSA by the Laboratory and conducted in partnership with the Russians. One of the RTGs was located far in the interior of the continent and had become deeply buried in the ice pack. Recovery by Russian and American experts necessitated a specially equipped, technically challenging expedition. Altogether, LLNL has helped in the successful removal of 486 RTGs throughout Russia and Antarctica, enabling the permanent securing of more than 20 million curies of radioactive material.