Laboratory researchers have developed GEOS, an advanced supercomputer code that offers hydrofracturing planners a new tool to increase the efficiency, lower the cost, and reduce the environmental impacts of recovering oil and gas from shale. Hydraulic fracturing entails the pumping of a mixture of water, chemicals, and sand into the ground at high pressure. GEOS models the highly complex process of fluid-induced fracture of rock and fracture propagation. It builds on LLNL expertise in geomechanics, seismology, and HPC to predict the behavior of Earth’s subsurface with uncertainty estimates. The three-dimensional (3D) code can simulate subsurface fracture networks in a variety of geological settings. GEOS operates at multiple temporal and spatial scales to properly model fracture details while tracking long-term overall behavior. The oil and gas industry has taken note, and several companies are partnering with the Laboratory to use GEOS.

Using satellite observations and a large suite of climate models, LLNL scientists have found that long-term ocean warming in the upper 700 meters of Southern Hemisphere oceans has likely been underestimated by 24 to 58 percent. These results are important because ocean heat storage accounts for more than 90 percent of the Earth’s excess heat that is associated with global warming, and the Southern Hemisphere oceans make up 60 percent of the world’s oceans. Change in sea height is a key indicator of climate change. Detailed climate simulation results for the relative increase in sea surface height between the Northern and Southern hemispheres are consistent with highly accurate satellite altimeter measurements. However, these results are inconsistent with measurements of long-term change in heat content in Southern Hemisphere oceans, which are low by comparison. The difference may be attributed to poor sampling prior to 2004, after which a system of 3,600 automated floats were deployed worldwide. This system provides systematic coverage of the Southern Hemisphere oceans for the first time.

Researchers at LLNL and the U.S. Army Corps of Engineers’ Engineer Research Development Center (ERDC) collaborated in a three-year study for DHS to confirm that design standards for dams effectively serve to prevent failure after earthquakes. For five decades, soil filters consisting of coarser grain materials have been used to prevent catastrophic failure. The filters aim to prevent rapid erosion of soil particles that could lead to a delayed catastrophic dam failure when a crack forms after a large shock event. Current filter design standards are based exclusively on experimental studies. However, recent advances in time-dependent multiphase fluid and particle modeling allow for a better understanding of soil-grain dynamics. Existing LLNL geophysics models were revised and enhanced to dynamically simulate soil-filter erosion at both the grain scale and at the dam scale. These models were validated to carefully designed erosion, glass bead, and scaled centrifuge experiments conducted at ERDC. In addition to confirming current standards for dam filters, the models can be used to improve filter design and study potential failure mechanisms of full-scale dams due to erosion.

Laboratory scientists are developing and adapting existing advanced numerical models to help wind farm developers and operators better select wind farm locations and increase operational efficiency. The high-resolution computer simulations must account for complex atmospheric turbulence, which depends on local terrain details, distance above ground, and the effects of nearby turbines in a wind farm. Data gathered from field studies—some conducted at Site 300 and a nearby Altamont Pass wind farm—serve to validate the statistical results from models and associated uncertainty estimates. Among many ongoing collaborations, LLNL and the University of Wyoming experts performed the first-ever simulation of a 50-turbine wind farm that resolves individual spinning turbine blades using realistic turbulent winds. 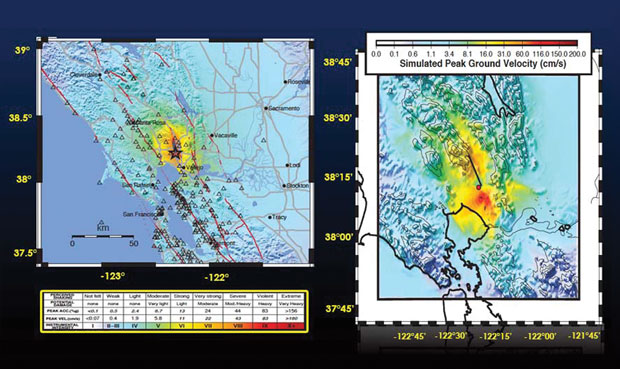 Working in partnership with researchers from the China Huaneng Group Clean Energy Research Institute, the Laboratory is helping to bring low-cost carbon capture to power plants in the United States. The Huaneng Group had opened a facility that captured carbon dioxide (CO2) from the 1.320-gigawatt coal-fired Shidongkou number 2 power plant at a cost of $30 to $35 per metric ton of CO2—much less than the $100 or greater estimates for first-generation technologies in the U.S. The team gathered data at Shidongkou and Duke Energy’s Gibson number 3 plant in Indiana, which LLNL used to build and validate a simulation model for Shidongkou’s post-combustion capture process. Researchers simulated a 1-million-ton-per-year post-combustion CO2 capture system, testing various new capture and solvent technologies for efficient CO2 capture in retrofits of existing coal plants. A number of design advances over other methods were found, suggesting that a system could be installed at Gibson 3 at a cost of $61 to $68 per metric ton.