During FY2013, a total of 337 system shots were fired at the National Ignition Facility (NIF), including 72 fusion ignition experiments and 86 shots for high-energy-density science applications. NIF is serving as a highly productive cornerstone of stockpile stewardship, providing valuable insights into the nature of the universe and advancing the prospect of laser fusion as a carbon-free energy source.

The highly successful shot was part of the “high-foot” campaign to address breakup of the capsule shell that was observed in earlier experiments. “High-foot” refers to the shape of the laser pulse, which is modified in a way that resists hydrodynamic instabilities and breakup of the shell but reduces overall compression in the implosion.

Experimental results were remarkably close to simulations and serve as an important tool for understanding and improving performance. The accomplishment constitutes a key step along the path to ignition described by NNSA in a December 2012 report to Congress. Achieving ignition is a vital goal in support of stockpile stewardship and provides an option for long-term energy security.

Groundbreaking campaigns of high-energy-density science experiments at NIF in FY2013 explored wide-ranging physical phenomena. Altogether, 86 high-energy-density shots provided valuable data about the properties of materials at extreme conditions, the interaction of matter with intense radiation, and hydrodynamic turbulence and mixing. These issues are critical to assessing the nuclear weapons stockpile and improving the performance and predictability of fusion ignition experiments.

For example, researchers from Los Alamos National Laboratory and the United Kingdom’s Atomic Weapons Establishment—working with the NIF team—conducted five more experiments in the Pleiades campaign. They are studying how x-ray radiation interacts with and burns through matter at temperatures of several million degrees. Another series of shots studied the behavior of iron at eight million times Earth’s atmospheric pressure, providing clues to the formation and structure of planets. Similar experiments for the Stockpile Stewardship Program characterized the equation of state of tantalum. In addition, scientists conducted a series of shots that replicated, at very small scale, physical processes occurring in a nuclear detonation. These nonnuclear tests support efforts to improve U.S. forensic capabilities that would be relied on to quickly detect, locate, and assess the occurrence of a nuclear blast.

In FY2013, NIF transitioned to a user facility for fundamental high-energy-density science, stockpile stewardship, and other national security applications. Experimental programs are guided by the Science on NIF Technical Review Committee and a newly formed NIF Management Advisory Committee. Support capabilities have grown considerably to meet strong user-community demand for both large numbers and different types of experiments. The NIF team fabricated 317 high-precision targets in FY2013 with over 40 new target types. The number of experimental configurations, or “platforms,” fielded has increased from six in FY2010 to about 35 in FY2013.

In addition, 13 new diagnostic capabilities were installed to support more types of experiments and significantly enhance the kinds of data that can be collected. As an example, the new Target Diffraction In-Situ system was used to measure the growth of instabilities in the structure of tantalum at high pressure and determine the material’s strength. Important milestones were also reached in installing the Advanced Radiographic Capability at NIF, which will enable researchers to record a series of snapshots revealing the dynamics of materials under extreme temperatures and pressures.

Operational efficiency is also continuously improving. The effort per experiment (average number of person-hours per shot) has decreased from 6,000 hours in FY2009 to approximately 2,000 hours in FY2013. Critical path analyses along with process and equipment improvements have decreased shot turnaround time by a factor of two. For example, the time between a neutron-yield experiment and a subsequent shot has been reduced from 57 to 21 hours. Significant advances have also been made in environmental management, such as hazardous waste reduction (see Safety, Security, and Sustainability ).

Juan Soto (right) assists Rich Moore in reinstalling continuous phase plates in Level 3 of the target bay. In a week’s time in July, the NIF Target & Handling team completed a remarkable 99 final optics transactions. Among the many improvements in NIF operations, the efficiency of changing user optics within the target bay has approximately doubled, and the average number of person-hours per shot has decreased by about a factor of three since FY2009. 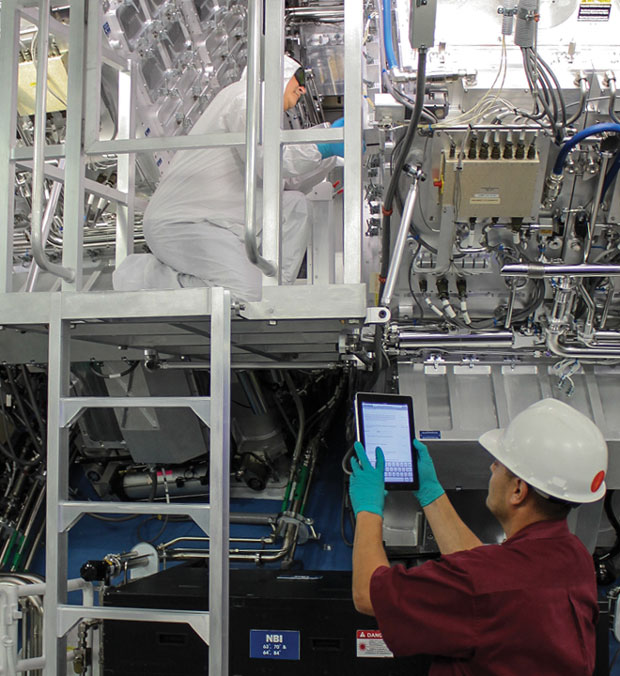