Laboratory researchers are developing new deep-learning and high-performance computing algorithms that sift through massive amounts of data for evidence of nuclear proliferation activities. Advanced Data Analytics for Proliferation Detection (ADAPD), a five-laboratory effort led by LLNL, is aimed at improving early detection of nuclear proliferation activities. ADAPD pushes the limits of deep learning by using neural networks to "map" images, text, and video into a feature space. All relevant data is categorized based on how it relates to the processes involved in building a nuclear weapon. ADAPD will make it easier for analysts to evaluate evidence of proliferation activities by prescreening millions of images and hundreds of videos.

In August 2019, the National Atmospheric Release Advisory Center (NARAC) celebrated its 40th anniversary. NARAC serves as DOE's plume-modeling center for real-time and predictive assessments of atmospheric releases of nuclear, radiological, chemical, biological, and hazardous natural materials. The first emergency call came to NARAC (then ARAC) following the accident at the Three Mile Island nuclear power plant. The team worked around the clock for the next 10 days to generate maps that were used to determine the impact of the radiological material released.

This year, subject matter experts from LLNL emergency response programs, including NARAC and the Radiological Assistance Program (RAP) Region 7, participated in multiple real-world missions. NARAC staff provided monitoring support in response to the fire at the Susana Field Laboratory, and RAP team members were deployed to collect field samples, some of which were returned to and analyzed at LLNL. NARAC also assessed actual and potential contamination during the Hanford Plutonium Finishing Plant demolition project. For this effort, NARAC put into operation its recently developed high-resolution computational urban dispersion model.

LLNL researchers are developing innovative countermeasures to biological and chemical agents and disease. The team is particularly focused on drugs that could permeate the blood–brain barrier (BBB), which protects the brain by separating its blood supply from foreign fluids in the central nervous system. In an important breakthrough, they found a promising candidate antidote to counter nerve agents, molecule LLNL-02, which is able to cross BBB and rapidly reach the brain.

The Laboratory is using its supercomputers to test antidote viability. Each potential drug requires hundreds of simulations, and each simulation involves 5 quadrillion equations. In tandem, Laboratory scientists synthesize selected compounds and test them for BBB permeability to validate simulation results. LLNL-02 successfully passed toxicology tests at the U.S. Army Medical Research Institute of Chemical Defense. At Livermore, initial in vivo animal tests of LLNL-02 have demonstrated that the molecule reaches the brain within 5 minutes of administration and provides a 100 percent survivability rate.

Laboratory researchers have also developed and tested an artificial BBB, which will contribute to LLNL's iCHIP (in vitro chip-based human investigational platform) project. Using iCHIP technology, researchers can test new pharmaceutical drugs to treat neurological disorders without the need for human or animal subjects. The Laboratory's "brain-on-a chip" is a microelectrode array that listens to bursts of electrical energy emitted by neural cells living on a chip when communicating with each other. It has been used to analyze rodent brain cells' electrical activity and the physiological responses of cells on the platform for up to 30 days. Efforts are underway to validate the technology and demonstrate that the cells on the engineered platforms can generate human-relevant data. 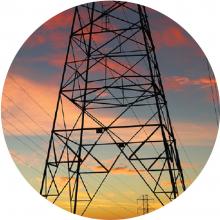 LLNL researchers launched the Quantitative Adversary Risk Assessment (QIARA) project to model power outages. QIARA, affectionately called "Squirrel," aims to develop a powerful tool for identifying weaknesses in the power grid. Squirrel combines with the LLNL-developed open source grid simulator (GridDyn) to determine points of failure in the grid that could cascade into major, long-term blackouts. Identification of these points and their potential impact will help government agencies and utilities prioritize investments to increase grid resilience against cyberattackers, hackers, and mischievious squirrels.

Launched in December 2019, the MiniCarb cube satellite or "CubeSat" features a next-generation CubeSat bus developed at Livermore. The nanosatellite carries an instrument for measuring the concentration of greenhouse gases in the Earth's atmosphere at specific altitudes of interest. Pursued in collaboration with NASA's Goddard Space Flight Center, the project is part of a growing Space Science and Security Program at the Laboratory.