Science and technology are central to addressing many of the most difficult problems of the 21st century. Research using LLNL’s multidisciplinary scientific expertise and its world-class experimental and computational resources leads to exciting discoveries and innovative solutions.

Evidence for “Life through Icy Impacts”

Researchers have furthered the theory that comets striking an ancient Earth could have provided the building blocks of life. A Laboratory scientist performed quantum molecular dynamics simulations of shocks in a CO 2 -rich ice, similar to what is found in comets. Production of significant quantities of simple carbon–nitrogen compounds was predicted, suggesting that cometary impacts could have synthesized prebiotic molecules without catalysts, ultraviolet radiation, or other special conditions. In 2013, gas-gun experiments performed in England on comet-like ice confirmed the simulation results and demonstrated that hypervelocity impacts could have produced several kinds of amino acids. The findings also clarify the role of such impacts in forming life-building compounds on other planets.

Measuring the Spin of Black Holes

An international team including LLNL astrophysicists reported the first-ever definitive measurement of a supermassive black hole’s spin rate, one of the few observable properties of a black hole. Previous measurements are uncertain due to the effects of obscuring, surrounding clouds. The finding was made with the two x-ray space observatories, NASA’s Nuclear Spectroscopic Telescope Array (NuSTAR) and the European Space Agency’s XMM-Newton. Knowing the spin rate is important because the formation, evolution, and properties of a galaxy are closely linked with those of a supermassive central black hole. Laboratory scientists played key roles in the design and testing of the x-ray optics for NuSTAR.

With outbreaks such as severe acute respiratory syndrome (SARS) still trending upward, LLNL researchers have advanced knowledge of how new viruses from animal reservoirs can infect people. They discovered that the genetic diversity of a viral population within a host animal could allow a virus to adapt to certain conditions that enable it to reach a human host. The team identified a mutation in a coronavirus that enables the jump from pigs to humans and determined that the gene came from the virus’s existing gene pool rather than spontaneous mutation. They also demonstrated that their technique—deep, high-throughput sequencing using overlapping read pairs—can detect mutations at ultralow frequencies. These advances could influence how future vaccines and antivirals are designed and tested. 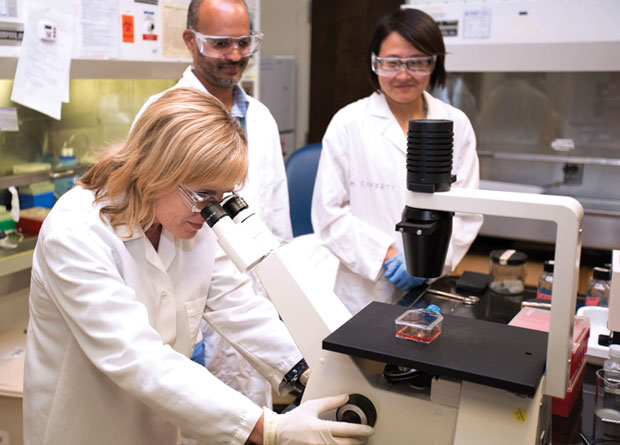 Livermore’s Center for Accelerator Mass Spectrometry (CAMS) marked its 25th year tackling scientific problems and global challenges. Successes in FY2013 include tracking radionuclides from the Fukushima Dai-ichi Nuclear Power Plant disaster (see Global Security ) and helping to make a surprising discovery about the human brain—that the hippocampus, a small area involved in memory, makes new neurons well into adulthood. Neuron age can be determined from the amount of carbon-14 in the DNA hippocampus cells, which dates when the cells were formed. Carbon-14 in the atmosphere (and absorbed by plants that were eaten) spiked during the era of nuclear weapons testing and has declined at a predictable rate since the test ban. The researchers found that each year, 1.75 percent of all human hippocampal neurons are renewed. This neurogenesis could contribute to human brain function into adulthood and even play a significant role in human behavior.

LLNL researchers, with colleagues from the University of Illinois and the National Institutes of Health, developed a new method for mapping small molecules in cell membranes and made an important finding about cholesterol. The technique, which revealed some unexpected relationships among molecules within cell membranes, provides a new way of studying cell structure and ultimately its function. LLNL’s nanoscale secondary ion mass spectrometer provided high-resolution images of the distribution of nitrogen-15-labeled sphingolipids, previously thought to associate with cholesterol to form small domains about 200 nanometers across. The images revealed that sphingolipid clustering was related less to cholesterol than to the cytoskeleton—the proteins underlying the membrane.

Computational scientists developed a new scheme for screening drug candidates using molecular docking—how well a candidate molecule “fits” into and binds to an active site in a protein molecule to be targeted by the drug. The team solved two roadblocks to wider use of the technique—its computationally intensive nature and scaling to supercomputing platforms—by developing a new hybrid scheme. They modified a popular open-source docking program from the Scripps Research Institute to create a new code, called VinaLC. A dramatic improvement in capability, VinaLC scales to more than 15,000 processors and is fast—one million compound-docking calculations take only 1.4 hours.

Livermore’s plasma researchers demonstrated the first-ever fully kinetic model of a dense plasma focus Z-pinch device in a realistic geometry. The Z-pinch is a well-studied, classic plasma configuration, but it still defies scientists’ ability to fully predict and understand its behavior. Simulations with the model, which tracks physical quantities at the particle level, reproduced key features of Z-pinch plasmas, including the ion beam, neutron outputs, and a type of instability long postulated to drive the dynamics in these plasmas. Simulations performed by the researchers also reproduce experimental neutron yields and high-energy beams for the first time. These results prompted the Defense Advanced Research Projects Agency to fund groundbreaking work at LLNL using Z-pinches to make compact neutron sources for applications beyond the previous state of the art.

An LLNL physicist and collaborators across the U.S. and Canada developed and successfully tested a new ion trap that could revolutionize radioactive decay measurements. The new apparatus, which traps radioactive ions in free space, infers the properties of particles emitted in radioactive decays that are either difficult to detect (e.g., neutrons) or nearly impossible to detect (e.g., neutrinos) by measuring the recoil of other, easier-to-detect particles involved in the decay. Researchers showed for the first time that it is possible to reconstruct the number and energies of the neutrons emitted by a decaying nucleus by measuring the time of flight of the recoiling daughter nuclei to a nearby detector. They also used the ion trap to study the beta decay of lithium-8, determining the direction and energy of all emitted antineutrinos. The technology paves the way for testing the Standard Model of physics with unprecedented precision.

An LLNL astronomer working with an international team has made the most detailed examination yet of the atmosphere of a Jupiter-like planet beyond our solar system. Using the OSIRIS instrument on the Keck II telescope, they found on exoplanet HR 8799c chemical fingerprints of specific molecules indicative of a cloudy atmosphere containing water vapor and carbon monoxide. These results demonstrate how such telescopic resolution allows researchers to begin a new phase in probing planet formation.

Vulcan Contributes to Many Mission Areas

The Vulcan supercomputer at LLNL brings Sequoia’s computing power to mission-directed work in national security, energy, bioscience, and atmospheric science programs. It is available for unclassified collaborations with industry and universities to advance science and boost U.S. economic competitiveness through technological innovation. Vulcan is based on the same IBM BlueGene/Q technology as the Sequoia platform, which proved its capabilities in record-breaking unclassified test runs before being switched over to classified work. For example, researchers performed the most powerful brain simulation ever, with 530 billion neurons and 100 trillion synapses. With a speed of 5 petaflops, Vulcan is one of the world’s most powerful computers available for unclassified projects. The machine debuted at the number eight spot on the June 2013 Top500 list of the world’s fastest supercomputers.

“Invention of the Year” and Five R&D 100 Awards

The artificial retina, a technology that the Laboratory played a prominent role in developing, earned a place in the top 25 best inventions of the year 2013 from Time magazine. The technology also garnered a 2013 best innovation designation by Popular Science . The LLNL team contributed three major components to the artificial retina development program. This DOE-funded project resulted in the creation of the first-ever retinal prosthesis—or bionic eye—approved in the United States by the U.S. Food and Drug Administration for blind individuals with end-stage retinitis pigmentosa. The invention was commercialized by Second Sight Medical Products, Inc., and is now called the Argus II Retinal Prosthesis System.

Livermore researchers also received five awards in the latest R&D 100 Awards competition, which recognizes the year’s top 100 innovations with commercial potential. The winning technologies are: DNA-Tagged Reagents for Aerosol Experiments, a versatile material that can safely, reliably, and rapidly diagnose airflow in assessments of contamination and other scenarios; the Movie Mode Dynamic Transmission Electron Microscope, which captures billionth-of-a-meter-sized events at frame rates more than 100,000 times faster than conventional techniques; Mantevo Suite 1.0, the first integrated suite of miniapps (small software applications) for high-performance computing; the Laser Screening at High-throughput to Identify Energetic Laser Distortion, which reduces the time to screen 48 NIF laser checkpoints from 12 hours to less than 1 second; and Efficient Mode Converters for High-Power Fiber Amplifiers, which overcomes a key limitation of high-power fiber lasers by maintaining beam quality as power is increased. LLNL has received 148 R&D 100 Awards since the competition began in 1978.

Livermore materials scientists and engineers are developing a novel set of additive manufacturing techniques to create materials with bulk properties that do not exist in nature and micro-engineered materials to meet mission needs. In FY2013, they fabricated the world’s stiffest ultralight material. The new material’s microarchitecture—consisting of eight-pointed truss structures with considerable void space—represents the basis for an exciting new class of ultralight, stiff, and strong materials. With their ability to create micro- to macroscale structures with extreme precision, LLNL researchers are also using direct ink writing to engineer embedded sensors, polymer-lattice-ordered foams, unique radio frequency components, and stretchable conductive materials.

At the Large Underground Xenon (LUX) experiment, the world’s most sensitive dark matter detector has seen no events yet. The result rules out some possibilities of what dark matter could be. A key component on the ultrasensitive detector, located nearly a mile underground, is the copper photomultiplier tube mounting structure (shown in the photo), which was designed and built by LLNL. Building on a synergistic overlap with nonproliferation detector programs, Livermore researchers have been involved in the LUX experiment since 2008. 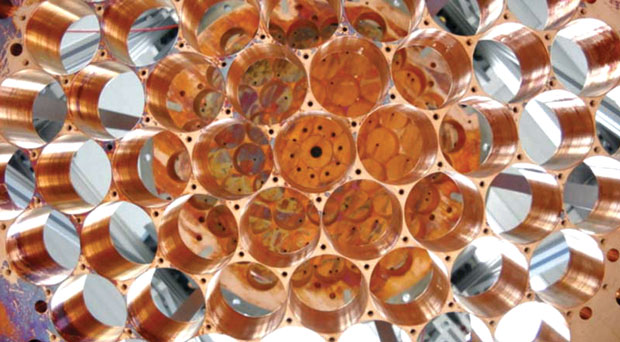