In groundbreaking cancer research, scientists discovered a herpes virus in bladder cancer specimens using a Livermore-developed biodetector. Published in the journal Tumor Biology, the study is the first ever to link the virus to the seventh most common human malignancy. The Lawrence Livermore Microbial Detection Array (LLMDA) can detect more than 3,000 viral species and 2,000 bacteria species using 388,000 DNA probes on a small glass slide in its current version. Also used to test vaccine safety, the LLMDA has been licensed to St. Louis-based MOgene LC for a broad range of possible applications, including food safety, law enforcement, and medicine.

In the Federal Laboratory Consortium’s technology transfer awards, a team from LLNL and the Environmental Protection Agency (EPA) won an Outstanding Partnership Award for developing the Rapid-Viability Polymerase Chain Reaction (Rapid PCR) technology to boost the speed, safety, and cost-effectiveness of testing for anthrax spores. The technology allows a testing lab to process 150 samples in as little as 48 hours—instead of the two days and 30-sample-per-day limit of previous methods. Rapid PCR has been adopted by the EPA’s Environmental Laboratory Response Network for responding to possible future anthrax attacks.

Livermore continued to assist Japan in its response to the situation in and around the Fukushima Dai-ichi Nuclear Power Plant. With its broad knowledge of the mechanisms of cesium’s environmental behavior, Livermore began partnering with the University of Tokyo to enhance understanding of cesium uptake in plants. An LLNL researcher toured the Dai-ichi site and briefed the Japanese government and Tokyo Electric Power Company on how the Laboratory’s know-how could be applied to short-term cleanup and the long-term restoration, decontamination, and decommissioning of the plant, as well as broader remediation in Japan. LLNL researchers and DOE staff participated in a third workshop for Fukushima responders, where the head of Livermore’s Marshall Islands Program explained the remediation of cesium, drawing on the Laboratory’s track record as the only DOE site experienced with cesium remediation through reoccupation.

The Laboratory was recertified by the Organisation for the Prohibition of Chemical Weapons (OPCW) as one of only two in the United States accredited to analyze suspected chemical weapon agents under the Chemical Weapons Convention. After a lapse in accreditation, the Laboratory received an “A” grade in three consecutive semiannual tests starting in late 2011, attaining recertification in early 2013. OPCW was awarded the Nobel Peace Prize in 2013 for its extensive efforts to eliminate chemical weapons.

The Laboratory uses techniques such as gas chromatography and nuclear magnetic resonance spectroscopy to detect chemical weapons agents and chemicals that indicate their manufacture. Advancing the state of the art, LLNL developed a new method—combining heteronuclear single quantum coherence and diffusion-ordered spectroscopy—for identifying organophosphorus compounds, which are common among chemical weapons agents.

Protecting aviation from terrorist threats is an unforgiving task: measures to detect explosives must be right every time. Against this ever-evolving threat, LLNL seeks to develop a predictive capability to improve explosives detection and mitigation by combining its world-leading computational resources with explosives expertise. In FY2013, the Laboratory concluded a project for the Department of Homeland Security to computationally study aircraft vulnerability to homemade explosives. Researchers created a structural model of an aircraft and used multiphysics and other codes to generate important data such as threshold explosive masses for catastrophic damage at various locations in an aircraft.

LLNL explosives expertise also supports the U.S. military. An important effort is the design and development of an advanced kinetic-energy warhead for the Department of Defense. Preparations in FY2013 led to a highly successful hypersonic sled test at Holloman Air Force Base in October 2013. The test “demonstrated that the warhead functions in a flight-representative environment,” said a Department of Defense representative, bringing the Conventional Prompt Global Strike program “one important step closer” to its ultimate objective. The Laboratory has served as technical lead and integrator of the effort to simulate the warhead’s hypersonic operating environment, using simulations and experiments—including an earlier sled test in July—to design components and test key issues related to material strength, aeroheating, ablation, and aerodynamic flight stability..

In its 20th year of operation in 2013, the U.S.–Russia Highly Enriched Uranium (HEU) Purchase Agreement achieved its goal of converting more than 500 metric tons of HEU to safer low-enriched uranium for use in American nuclear power plants (shipping containers are shown). Livermore researchers supported the HEU Transparency Program by serving on and coordinating the U.S. monitoring team. They provided advanced equipment such as an LLNL-developed portable nondestructive assay system and maintained a repository of the collected monitoring data. 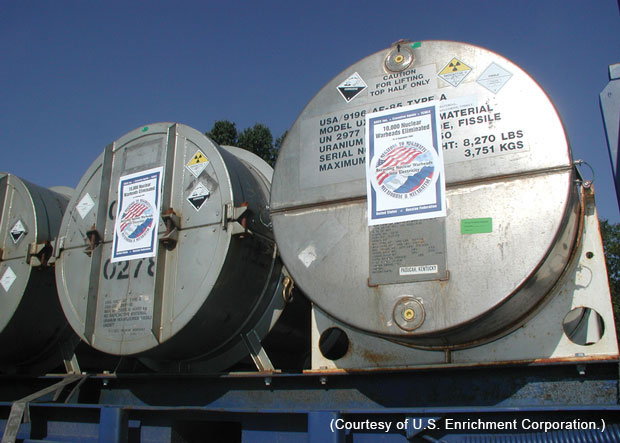