Supporting stockpile stewardship through a wide range of nonignition experiments and pursuit of laser fusion ignition, and operating as a national user facility for high-energy-density science

Campaigns of HED science experiments at NIF explored wide-ranging physical phenomena central to stockpile stewardship. Researchers gathered information about the properties of materials at extreme conditions, radiation hydrodynamics and transport, and material mixing. These issues are critical to understanding nuclear weapons performance and improving the predictability and results of fusion ignition experiments. Researchers achieved excellent results in the second material dynamics experiment examining the strength of plutonium at extreme conditions, and they continued a series of high-Z (high-atomic-number) diffraction shots to study plutonium’s equation of state at extreme pressures. A team of NNSA researchers has also launched an experimental campaign to study radiative opacity—how opaque a hot, dense material is to transporting photons. Their first experiment was NIF’s 2,000th shot since becoming operational in March 2009.

Achieving fusion ignition and energy gain at NIF is a grand scientific challenge. Scientists are making progress on several fronts. In a two-shot series, experimenters at NIF nearly doubled the previous record for number of fusion neutrons generated. The first shot on June 2, 2017, produced 1.7 x 1016 neutrons (48 kilojoules of energy). Fired on August 28, 2017, the second, with higher laser energy, reached 2.0 x 1016 neutrons (57 kilojoules of energy), the highest yield to date. Full data recovery and analysis is ongoing. Results are approaching the “burning plasma regime,” in which the hot spot in the deuterium–tritium (DT) fuel is heated more by fusion-created alpha particles than by energy from fuel compression.

These experiments benefited from lessons learned in many supportive NIF campaigns over the last two years, which studied options to produce much “rounder” implosions. Assessments of the pros and cons led to the choice of a high-density carbon (HDC) capsule to contain the DT fusion fuel. HDC matches well with use of a depleted uranium hohlraum (the case enclosing the fuel capsule) and a low-density helium gas fill. For these shots, the target fabrication team was able to shrink the capsule fill tube diameter from 10 to 5 micrometers (a human hair is 100 micrometers thick) to reduce perturbations in the implosion. Symmetry control is vital for ignition and remains an important focus area for the research team.

The Discovery Science program enables a broad user community to perform HED experiments under conditions that only NIF can generate. These experiments include studies of material properties, hydrodynamics, and the interactions of intense radiation fields with matter. The focus of one campaign has been iron, the core material of Earth and Earth-like exoplanets. A team of researchers is investigating whether a giant rocky planet could have an Earth-like magnetic field, which is needed to harbor life. The experiments are measuring iron’s melting at pressures from 5 to 20 megabars (1 megabar equals 1 million atmospheres). An initial shock melts the iron (at about 2.5 megabars); then the material is slowly compressed to determine at what pressure iron re-solidifies. Data will indicate whether the core of a giant planet has enough liquid iron in its outer regions to generate an Earth-like magnetic field.

New technologies and equipment are increasing operational efficiency and experimental capabilities. In December 2016, the NIF team fielded an experiment utilizing the Advanced Radiographic Capability (ARC). A high-energy, high-intensity laser, ARC produces brighter, more penetrating x rays than standard NIF backlighting techniques. The ARC- generated radiograph showed, in never before seen clarity at such extreme conditions, an imploding shock driven by x rays in a NIF hohlraum interacting with a deliberately machined groove in a copper foam ball. The experiment was an important step toward applying this new capability to generate high-quality radiographs in support of the Stockpile Stewardship Program.

The target for the ARC experiment was held by NIF’s first of two new Target and Diagnostic Manipulators (TANDMs), which was installed in June 2016. Use of TANDM to insert targets for experiments has become routine. In February 2017, the second TANDM was moved to the NIF target bay and is being used for manipulating diagnostics. The TANDM positioners were designed to enhance NIF’s capabilities and operational efficiency. Now, NIF has two cryogenic target positioners, three dedicated diagnostic positioners, and the two TANDMs, which can insert either non-cryogenic targets or diagnostics. 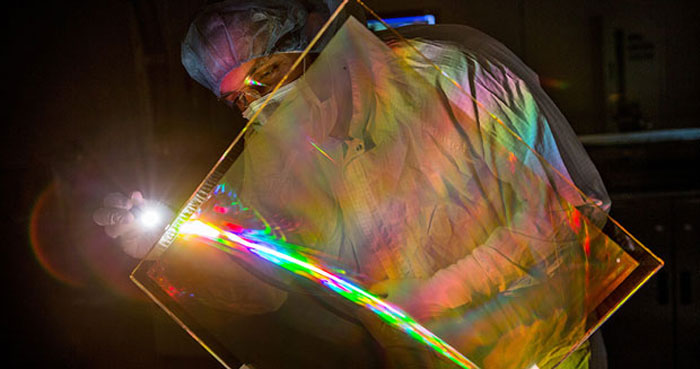 Laboratory chemical engineer Marcus Monticelli inspects the anti-reflective coating on a NIF grating debris shield. The coating reduces NIF-energy loss and damage to the laser and the shield. LLNL researchers have also developed a patented chemical process that makes the surface of optics more damage resistant by removing impurities and absorbing microfractures. These important breakthroughs cut the cost of repairing or replacing damaged optics and present opportunities to boost the energy of NIF.