Each year, more than 12,500 children at the fourth- and fifth-grade levels, along with their chaperones, are introduced to scientific concepts through the Laboratory’s ever-popular Fun With Science program. This program offers young minds a tour of the Laboratory’s Discovery Center, followed by participation in hands-on experiments that introduce students to a scientific curriculum. Fun With Science is a mainstay at the Discovery Center, and the show has become a featured event at summer street fairs, science festivals, and other special events throughout the greater San Francisco Bay Area.

Science Fare at the Fair

LLNL promotes science through various fairs and festivals. In November, the Laboratory participated in the 6th Bay Area Science Festival, which attracted more than 30,000 young scientists and their families to AT&T Park in San Francisco, California. In addition to participating in presentations of Fun With Science, attendees took 3D virtual tours of the Laboratory via several immersive videos, while children were challenged to hop aboard special energy bikes and transform their kinetic energy into power to run small household items and make lights glow.

The Laboratory continued to sponsor the annual Alameda County Science and Engineering Fair (ACSEF), held in March. More than 700 middle- and high-school students and 175 teachers from 18 school districts participated in the fair, earning awards and scholarships. In addition, 60 special awards were given by national and local government and industry sponsors. The science fair winners move on to the Intel International Science and Engineering Fair, the California State Science Fair, and the national Broadcom Masters competition.

LLNL’s Science on Saturday (SOS) lecture series for middle- and high-school students plays to sold-out crowds every year. More than 6,000 people attended this season’s 16 lectures held in Livermore, Tracy, and Oakland, California. Each lecture highlighted cutting-edge science and technology at the Laboratory. This season, SOS presented themed discussions on “Ingenious Inventions”—pairing Laboratory researchers with local science educators to discuss topics such as DNA applications in forensic science; new materials for additive manufacturing; and building “nano-bots” as a new approach to vaccines, drug delivery, and energy needs. The events were recorded for the University of California’s TV website and YouTube.

Each year the Laboratory gets up close with Hollywood’s perspective on science and technology through the Science on Screen lecture series for students ranging from middle-school to college level. It combines popular feature-length movies with prominent researchers from the Laboratory, who discuss the scientific viability of what’s depicted in these classic science fiction films. This year’s series of three lectures, again playing to sold-out audiences, looked at 3D printing and shape-shifting technology, countering biological outbreaks, and the search for new elements.

In addition, working with the Livermore Valley Joint Unified School District and the national Girls Who Code program, LLNL offers special workshops for middle- and high-school students to build skills in computer-aided design. This year’s day-long event (for both boys and girls) was sponsored by the newly formed Livermore Lab Foundation (see Managing for the Future). The Laboratory also partners with Las Positas College for an annual Science and Engineering Seminar Series, in which LLNL researchers present “behind the scenes” perspectives of how multidisciplinary science actually works. The seminars help to connect students to potential career paths.

In October, the Laboratory’s Deputy Director for Science and Technology Patricia Falcone presented checks totaling $100,000 to the recipients of the 2017 LLNS Community Gift Program. LLNS received 71 applications requesting nearly $550,000. Thirty-seven applications were selected for awards serving children in Alameda, Contra Costa, and San Joaquin counties, with a focus on literacy; science, technology, engineering, and math education; and cultural arts. Other gifts focused on children, families, senior citizens, and individuals in need of assistance. 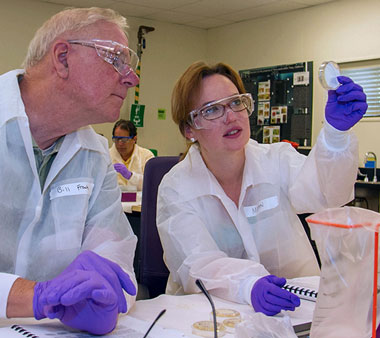 Each summer, educators depend on LLNL’s Teacher Research Academy to gain key skills they need to bring state-of-the-art science into their classrooms—from 3D printing and astrophysics to biotechnology and high-performance computing. In addition to training teachers from all over California, in FY 2017 LLNL hosted more than 500 students across the nation—at the Laboratory for internships and educational training.