LLNL is pursuing a strategic initiative to capture, sequester, and convert carbon dioxide (CO2) to useful products and fuels. The work builds on LLNL's development of a novel carbon-capture technology that uses CO2 sorbents in microcapsules to collect effluent carbon from power plants and smaller facilities. In the case of biogas-generating facilities such as sewage digesters, a mixture of CO2 and methane is produced. By removing CO2 with microcapsules, the resulting pure methane (natural gas) can be used as a renewable fuel or to make specialty chemicals.

Laboratory scientists are developing modular electrochemical reactors that use electricity to efficiently convert CO2 to valuable chemicals. Guided by computer models that span atomic to macro scales, the researchers are optimizing the catalytic process through control of the local reaction environment and by designing 3D microstructures of metal catalysts and other materials.

Another LLNL research team is working on more efficient ways to convert methane into useful products. The team is using metanotrophs—genetically modified microbes that convert methane to organic acids—to "print" bacterial microbes in the polymer walls of 3D-printed chemical reactors. Other Laboratory researchers are exploring approaches for returning carbon to soil in long-lived forms to reduce atmospheric CO2 and make farmland more productive.

In March 2019, climate scientists at LLNL announced the release of new data sets for the international community to analyze and enhance understanding of climate change. These new data sets, based on next-generation simulations performed at Livermore and other climate research centers, significantly contribute to the Coupled Model Intercomparison Project, now in it its 6th phase (CMIP6). The project's goal is to define standard simulations that can be compared to gain new insights into climate change. LLNL researchers have helped lead CMIP activity since the effort's inception 20 years ago, providing day-to-day coordination, developing software, and helping to set requirements. Livermore also provides leadership for DOE's development of the E3SM next-generation Earth system model, which was used for some of the CMIP6 core simulations.

This year, Livermore researchers and collaborators published work to refine an evaluation technique (called emergent constraints, or ECs) that is used to bound uncertainties in climate predictions. ECs arise from general agreement in a prediction (e.g., seasonal cycles in temperature) across an ensemble of climate models—but the prediction may be valid or an artefact of the simulations. The authors describe methods to substantiate validity (e.g., identification of a plausible mechanism) and improve predictions through effective use of confirmed ECs together with the increasing amounts of high-quality observation data being gathered.

In FY 2019, DOE's Advanced Manufacturing Office announced the 8th round of new awards in its High-Performance Computing (HPC) for Manufacturing program (now part of the larger HPC for Energy Innovation program). Laboratory researchers are working on a project to optimize operating conditions in a glass manufacturing process using radiative transport methods developed at LLNL. The Laboratory is also helping PPG Industries, Inc., by using molecular dynamics calculations to determine if certain organic molecules can inhibit corrosion as part of the HPC for Materials program. This work will be applied to training an algorithm that predicts corrosion. Lawrence Livermore, in partnership with Lawrence Berkeley and Oak Ridge national laboratories, has led these industry-outreach programs for DOE since their inception in 2015.

Researchers from LLNL and Stanford University have developed a technology that can remove nitrate from water selectively, preserving beneficial minerals and dramatically reducing the cost of treatment compared with other purification methods. The contamination of water resources with nitrate is a growing significant problem. In agricultural regions, many wells exceed the Environmental Protection Agency's limit for nitrate in drinking water due to runoff of fertilizer. The research team focused on capacitive deionization (CDI), a water treatment technology that can be used to remove salt from brackish water. CDI electrodes—made from ultramicroporous carbon with less than 1-nanometer-size pores—are perfect for removing nitrate molecules in fertilizer. The team conducted tests on runoff containing chloride, sulfate, and nitrate and demonstrated selective adsorption of nitrates. They also performed high-fidelity molecular dynamics simulations to confirm the experimental results and better understand the mechanisms involved. 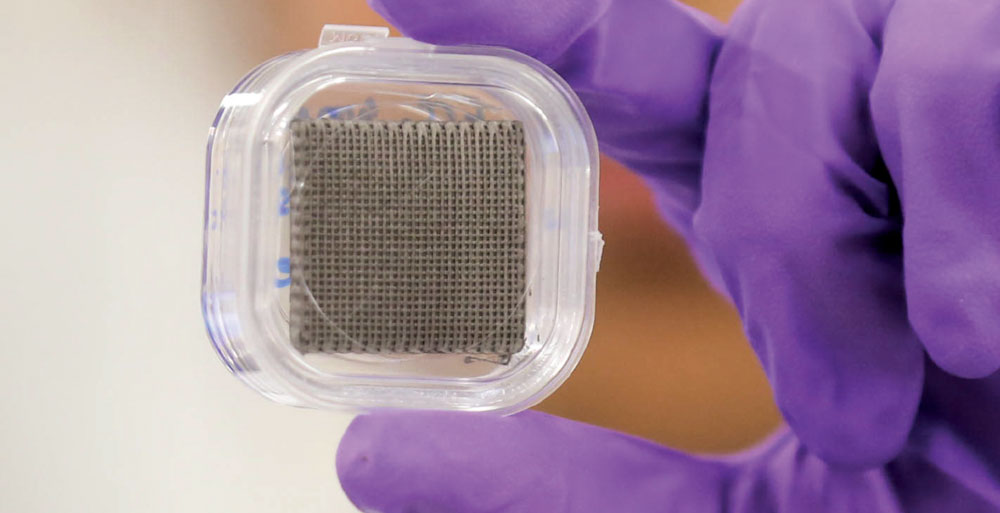 Researchers from LLNL and the University of California at Santa Cruz have created 3D-printed electrodes for supercapacitors capable of achieving record-breaking performance. The porous graphene aerogel structures support ultrahigh levels of manganese oxide for chemical storage of electric charge. The resultant supercapacitor has the highest recorded electric charge stored per unit area recorded to date. The breakthrough opens avenues to using supercapacitors as ultrafast-charging power sources for devices such as cell phones, laptops, and other small electronics.