Supporting stockpile stewardship through high-energy-density science experiments and pursuit of fusion ignition, and operating as a national user facility for scientific discovery and other applications (Credit: NASA/ESA/Hubble/Hubble Heritage Team [2015].)

During FY 2015, the National Ignition Facility (NIF) conducted a total of 356 target shots—an 86 percent increase compared to FY 2014 and surpassing the stretch goal of 300. These shots included 266 for stockpile stewardship and 44 for the Discovery Science program. NIF continues to be a highly productive cornerstone of stockpile stewardship, supports diverse national-security applications, provides valuable insights into the nature of the universe, and advances the prospect of laser fusion ignition and energy gain.

In FY 2015, campaigns of high-energy-density (HED) science experiments at NIF explored wide-ranging physical phenomena central to stockpile stewardship. The shots gathered information about the properties of materials at extreme conditions, the interaction of matter with intense radiation, and hydrodynamic turbulence and mixing. The results are critical to understanding nuclear weapons performance and improving the predictability and results of fusion ignition experiments. In FY 2015, researchers conducted the first experiments studying the behavior of plutonium at extreme pressures. Shots using tantalum foils tested an experimental method to characterize the strength of high-atomic-number materials at high pressures and low temperatures via x-ray radiographic measurements of the growth of hydrodynamic instabilities. In addition, the Pleiades campaign, a series of 26 radiation flow experiments at NIF fielded by scientists from Los Alamos and the United Kingdom’s Atomic Weapons Establishment, concluded with its final shot in 2015.

Achieving fusion ignition and energy gain at NIF is a grand scientific challenge, and scientists are making progress on several fronts where impediments preventing success have been identified. The research aligns with physics issues important to stockpile stewardship—success would provide the Stockpile Stewardship Program with significant new experimental capabilities to study the physics of ignition and thermonuclear burn. One impediment to ignition is associated with poor control of the overall symmetry of the x-ray pulse created by the laser beam impinging on the walls of the holhraum, the open-ended cylinder containing the target capsule. Drive symmetry is needed to implode the target uniformly, create a central hot spot, and ignite the fuel. To identify workable options, experimenters are investigating a complex set of tradeoffs among hohlraum designs and gas fills, laser pulse shapes, and target capsule ablator materials.

Hydrodynamic instabilities in the imploding capsule present another set of issues—they contaminate the hot spot through the mixing of materials into the fuel. Experiments demonstrated that the “tent”—an ultrathin membrane that supports the target capsule inside the hohlraum—is a significant source of hydrodynamic instabilities that reduce implosion symmetry and neutron yield. Researchers are considering tent design alternatives and other options.

In FY 2015, NIF conducted 44 shots as part of the Discovery Science program, which provides academic users with access to the unique density, temperature, and velocity regimes that NIF can create. By comparison, just eight shots were fired in FY 2014. With the recent efficiency improvements, NIF was able to support eight different experimental campaigns this year, greatly enhancing collaboration between academia and LLNL scientists. One notable success addressed the mystery of the Eagle Nebula’s Pillars of Creation, where stars are born. A team of LLNL physicists, in collaboration with the French Alternative Energies and Atomic Energy Commission and the University of Maryland, replicated the phenomenon and created “pillar” structures in the laboratory.

Other Discovery Science program experiments studied material properties (equations of state) of hydrogen under conditions similar to those in giant planets, iron at pressures comparable to the interiors of Earth-like and super-Earth exoplanets, and plasma conditions relevant to the interior of white dwarf and brown dwarf stars. The hydrogen campaign, for example, characterized the phase transition as warm hydrogen (1,000 to 2,500 Kelvin) is compressed at megabar pressures and changes from a molecular insulating fluid to an atomic metallic conducting fluid. The data will help resolve the differing predictions of current hydrogen models in this regime.

The 86-percent increase in the number of target shots compared to the FY 2014 total is the result of teamwork—coupled with innovations in operational efficiency, new technologies, and carefully planned task execution. Many of the adopted ideas for improved operational efficiency have been based on the recommendations of a 120-day study, mandated by Congress, to find ways of increasing the NIF shot rate at constant annual funding. The study’s recommendations included steps to improve scheduling efficiency, such as the use of “mini-campaigns” that group similarly configured experiments to minimize facility reconfigurations. In addition, the NIF User office is working on improved interfaces with researchers. 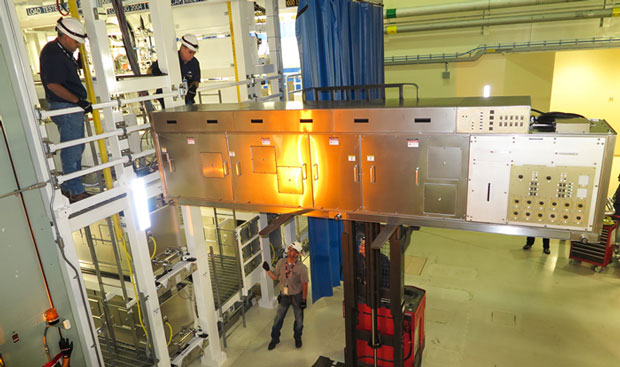