A team led by an LLNL researcher announced the world’s deepest use of electrical resistance tomography (ERT) to track carbon dioxide (CO 2 ) sequestered in a geologic formation more than 10,000 feet deep. The team, working in an oil and gas field in Cranfield, Mississippi, obtained time-lapse ERT images of more than 1 million tons of sequestered CO 2 . They demonstrated that the technique, which requires inserting an array of electrodes down deep boreholes, can monitor the movement of CO 2 in a complex geologic formation. ERT could have application as a remote monitoring and early warning system to track containment in reservoirs of sequestered CO 2 . Deep geologic sequestration of CO 2 is being evaluated internationally to mitigate the effect of greenhouse gases produced during oil- and coal-based energy generation.

LLNL engineers developed new nanostructured metal materials that could enable photovoltaic solar cells that harvest solar energy much more efficiently. The plasmonic “black metals” are actually an extension of the concept of black silicon. When silicon is processed in a certain way, such as being roughened at the nanoscale level, it traps light by multiple reflections, increasing its solar absorption. Unlike other black metals, which have been produced with random nanostructures, the Livermore material uses nanopillars and is “tailor made” to have low reflectivity and high absorption of visible and infrared light. By controlling the dimensions of the nanopillars, the researchers can essentially fine-tune them to reliably absorb the desired solar wavelengths. The work was featured as the cover story for the May issue of Applied Physics Letters .

A Laboratory scientist led an international team that compared simulations of 20 different computer models to satellite observations, concluding that atmospheric temperature changes are clearly related to human activities. The observations and simulations show a distinctive pattern: the lower stratosphere cooled markedly over the past 33 years, primarily because of human-caused depletion of stratospheric ozone; and large-scale warming occurred in the lower troposphere—most noticeably over the Arctic—mainly driven by human-caused increases in greenhouse gases. The new climate models analyzed by the team formed the scientific backbone of the 5th Assessment Report of the Intergovernmental Panel on Climate Change (IPCC). Over the past three years, Laboratory scientists have made significant contributions to the underlying assessments and preparation of the IPCC report. LLNL’s Program for Climate Model Diagnosis and Intercomparison leads the Earth System Grid Federation effort for DOE. The federation stores and distributes worldwide terascale data sets from coupled ocean–atmosphere global climate model simulations.

LLNL and the University of California (UC) at Berkeley announced the joint discovery of new materials that capture methane, a far more potent greenhouse gas than CO 2 and a substantial contributor to climate change. Methane, unlike CO 2 , interacts very weakly with most materials, making capture of the gas a significant challenge. The Livermore–UC Berkeley team computationally screened numerous materials, including roughly 100,000 zeolites. In simulations, one specific zeolite, dubbed SBN, captured enough medium-purity methane to yield high-purity methane, which could be used to generate electricity. Other zeolites were shown capable of concentrating dilute methane streams into moderate concentrations and so could be used to treat coal-mine ventilation air.

The California Public Utilities Commission and the California State Legislature approved a five-year agreement that will provide three California public utilities access to Livermore’s high-performance computing and expertise in engineering and applied science. Under the initiative, called California Energy Systems for the 21st Century, the Laboratory will assist in areas such as cybersecurity for the state’s electrical grid.

The California Energy Commission funds research at LLNL to examine load-balancing issues as more solar and wind resources are added to the grid. California is implementing a Renewables Portfolio Standard that requires the state to derive at least 33 percent of its electricity from eligible renewable energy resources by 2020. In FY2013, researchers ran thousands of supercomputer simulations to determine the value of using new energy storage technologies and demand-response initiatives to keep California’s complex grid system operating affordably and reliably.

In one of the hpc4energy projects, Robert Bosch, LLC, researchers worked with Laboratory computer scientists to scale a Bosch simulation code to run efficiently on one of Livermore’s supercomputers. They reduced the calculation time for each engine cycle by 70 percent and improved the model resolution, allowing them to examine combustion in greater detail than the Bosch computer system can produce. The hpc4energy incubator program focused on six selected pilot projects for Laboratory–industry partnerships to advance innovative energy technologies using high-performance computing. 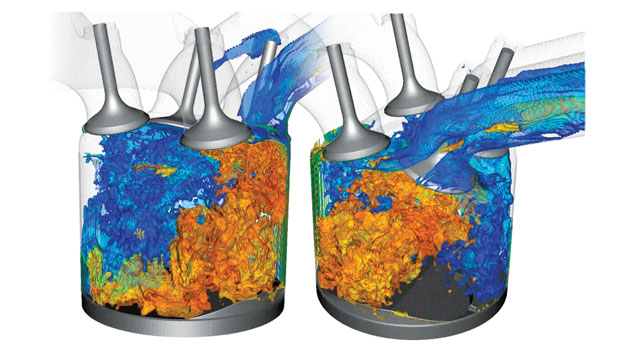