Each year, the Laboratory supports a wide range of activities within the community, demonstrating its commitment to being an integral, involved, and valued neighbor. LLNL participates in myriad science, technology, engineering, and math (STEM) education programs; volunteer efforts with local social service agencies; and charitable giving. In addition, LLNS’ gift program provides a direct investment in community education, arts, and services.

LNL’s Science on Saturday (SOS) lecture series for middle- and high-school students continued to play to sold-out crowds. This year, more than 5,000 people attended 10 lectures held in the cities of Livermore and Tracy. SOS events featured themed discussions on earth, wind, water, and fire—pairing Laboratory researchers with local science educators to discuss earthquakes, electricity, shale gas, and hydrology. As always, the presentations are free of charge and recorded for the University of California’s TV website and YouTube.

In FY 2015, the Laboratory added a new twist to its popular lecture series in Modesto, California, with Science on Screen. This three-week series for middle-, high-school, and college students combines popular feature-length movies with prominent researchers from the Laboratory who discuss the scientific viability of what is seen in these classic, cult, science fiction, and documentary films.

LLNL continued to invigorate interest in science through various fairs and festivals. In November, the Laboratory participated in the Bay Area Science Festival, which attracted more than 30,000 young scientists and their families to AT&T Park in San Francisco, California. In addition to day long presentations of Fun With Science, attendees were challenged to show off their scientific know-how or put their pedal power to the test through an energy bike connected to various household items.

Closer to home, LLNL sponsored the annual Alameda County Science and Engineering Fair held in March. Approximately 650 middle- and high-school students and more than 175 teachers from 18 school districts participated in the 2015 fair. More than 170 awards and scholarships were distributed for first, second, and third place, and about 60 special awards were given by national and local government agencies as well as industry sponsors.

Lawrence Livermore also sponsored an Expanding Your Horizons event. Such events are held several times a year throughout the San Francisco Bay Area to introduce science and technology careers to middle- and high-school girls. The free events pair women scientists and engineers with students in hands-on demonstrations of science.

As its name implies, Fun With Science provides an entertaining introduction of scientific phenomena to elementary school children. On Halloween, the students are treated to a visit by a not-so-mad scientist.

In FY 2015, more than 12,500 children at the fourth- and fifth-grade levels, along with their chaperones, were introduced to scientific concepts through hands-on experiments in the Laboratory’s popular Fun With Science program. Presented by Laboratory employees and retirees, the program provides an entertaining introduction to scientific phenomena and helps prepare students as they embark on their science education.

Using the Force to Socialize

Social media helped the Laboratory to expand its reach in education. In June, Livermore scientists and their counterparts at Los Alamos and Idaho national laboratories staged a Google+ Hangout to discuss the science of “Star Wars,” postulate just what it would take to build a light saber or land speeder, and speculate on how much energy would be required to power up a “Death Star.” (Hint: Don’t count on one in any century soon.)

The Laboratory continued to stage successful chats through Reddit’s Ask Me Anything, showcasing staff members who, to cite two examples, discussed how LLNL assists veterans in their post-military careers, and its development of a carbon capture and storage technology based on common baking soda (see , Energy and Environment ). During these chats, participants speak directly with Laboratory researchers.

At the Core of California’s Curriculum

At an October ceremony at the LLNS office in the city of Livermore, LLNL Director William Goldstein presented checks totaling $100,000 to the recipients of the 2015 LLNS Community Gift Program. LLNS received 78 applications totaling almost $700,000 in requests. Thirty-two applications were selected for awards through a committee review process. The majority of these awards serve children in the Tri-Valley and San Joaquin County, with an emphasis on science, mathematics, education, and cultural arts. 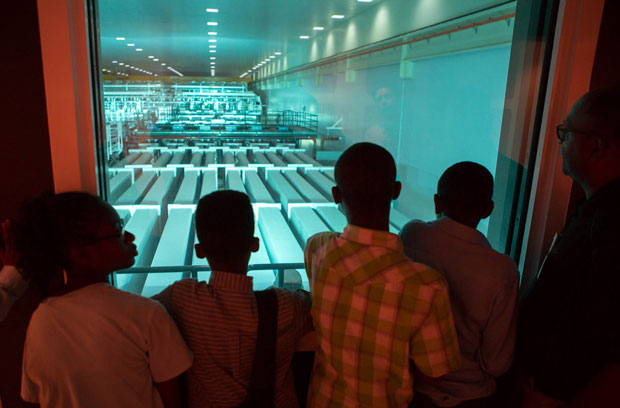 More than 60 disadvantaged youth from Oakland, San Francisco, and Tracy, California, came to Livermore in June for a special “Day at the Lab,” as part of the White House initiative, “My Brother’s Keeper” (MBK). LLNL served as the kickoff to a series of MBK events being held at the national laboratories. Throughout the day students were treated to hands-on presentations in science and engineering, as well as tours of the National Ignition Facility and the Discovery Center. President Barack Obama applauded the Laboratory for its efforts. “You are working to curb juvenile arrests, reduce absenteeism, and help these kids to imagine a bigger future for themselves.”