Lawrence Livermore National Security, LLC Overseeing management and operation of the Laboratory for the U.S. Department of Energy and the National Nuclear Security Administration

Associate Vice President for National Laboratories, University of California, Office of the President

Chair of the Business, Operations, and Security Committee 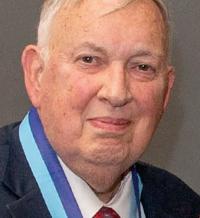 National security leaders past and present paid tribute to Ambassador Linton Brooks as he was presented the John S. Foster Jr. Medal in November 2019. Brooks was recognized for his exceptional leadership in advancing U.S. national security as a strategic thinker and ambassador for arms control, a visionary administrator of the National Nuclear Security Administration, and a dedicated nuclear submarine officer. He is the 5th recipient of the Foster Medal, which is administered by LLNS and honors exceptional service in support of U.S. nuclear security.