Science and technology are central to addressing many of the most difficult problems of the 21st century and to understanding the world around us. Research using LLNL’s multidisciplinary scientific expertise and its world-class experimental and computational resources have led to exciting discoveries and innovative solutions.

Advances and Partnerships in Additive Manufacturing

Collaborations with industry are rapidly advancing additive manufacturing (AM). Researchers from LLNL and a San Francisco Bay Area company, Autodesk, Inc., are exploring how design software can accelerate innovation for the 3D printing of advanced materials. Under a cooperative research and development agreement, LLNL is using Autodesk’s state-of-the-art software for generative design to study large sets of “potentially printable” material microstructures. The goal is to design materials with previously unachievable properties to produce products such as lightweight, impact-absorbing helmets. In work funded by America Makes (a public–private partnership for AM research), LLNL and General Electric are developing open-source algorithms for additively manufacturing metal parts layer-by-layer using the selective laser melting process, in which a focused, high-energy laser beam fuses metal powder particles.

Starting in 2022, the 8.4-meter Large Synoptic Survey Telescope (LSST) will take digital images of the entire visible southern sky every few nights, revealing unprecedented details of the universe. The images will help researchers study the formation of galaxies, track potentially hazardous asteroids, observe exploding stars and better understand dark matter and dark energy. In September 2015, DOE approved the start of construction for LSST’s 3.2-gigapixel digital camera, which is the size of a small car. DOE is funding the camera, while financial support for the rest of the enormous undertaking comes primarily from the National Science Foundation. LLNL has leadership responsibilities for two of the major camera subsystems, and a Laboratory researcher is a key manager for the camera system effort. Livermore has played a pivotal role in the LSST project for more than a decade, drawing on expertise in large optics development for NIF.

The Laboratory is finding wide application for its innovative biocompatible neural interface technologies that are implantable and capable of recording and stimulating neurons in the brain. This year, the National Institutes of Health (NIH) awarded LLNL and research partners several grants to develop neural interface systems that will enable scientists to better understand how the brain and sensory organs function at unprecedented resolution. The team is to design and build neural interfaces that can record and stimulate hundreds to thousands of neurons simultaneously. Their goal is to produce an interface with 1,000-plus sensors that can eventually be expanded to 10,000 sensors.

In addition, LLNL is leading the development of implantable neural interface technologies for the first three projects in President Barack Obama’s Brain Research through Advancing Innovative Neurotechnologies (BRAIN) Initiative. These projects are sponsored by the Defense Advanced Research Projects Agency (DARPA). LLNL is teaming with the University of California at San Francisco to develop the world’s first closed loop neuromodulation system to treat neuropsychiatric disorders. For this effort, Livermore developed the world’s first high-spatial-resolution recordings of electrical signals in living human brains. In a second project, researchers from LLNL, the University of California at Los Angeles and the University of Pennsylvania are developing the world’s first neuromodulation system to treat memory disorders. Finally, as part of DARPA’s Hand Proprioception and Touch Interfaces program, an LLNL–Case Western Reserve University team is building the world’s first neural system to enable naturalistic feeling and movements in prosthetic hands for wounded service members.

Lawrence Livermore demonstrated thevalue of HPC in transforming the design and testing of new rocket engines and launch vehicles in work for the Defense Advanced Research Projects Agency (DARPA) and two ambitious small American companies. For the first project, the Livermore team simulated the performance of a novel liquid-propellant rocket engine intended for DARPA’s Next-Generation Rocket program. Using LLNL’s supercomputers, researchers performed 3D simulations using up to a 60-million-cell mesh to take a detailed look at the safety and efficiency of engine operation. The second effort used simulations to study the thermal and structural response of a design for DARPA’s reusable launch vehicle called the XS-1. The team examined the flightworthiness of the system at various points along a simulated flight trajectory from liftoff to Mach 10 and back to vertical landing.

An innovative diode-pumped solid-state laser system, the High-power Intelligent Laser Diode System (HILADS), has been commissioned for use as a key component in the High-Repetition-Rate Advanced Petawatt Laser System (HAPLS). LLNL is designing and building HAPLS for the European Union’s Extreme Light Infrastructure Beamlines high-intensity laser science facility, under construction in the Czech Republic. HAPLS will be the world’s highest-average-power petawatt (quadrillion-watt) laser system, producing 10 ultrashort 30-joule pulses per second. To achieve this high repetition rate—and to increase overall laser system energy efficiency—the Livermore team had to look beyond flashlamps, which are used in NIF, and turn to HILADS as the energy source to pump HAPLS. Diode lasers, produced by Tucson, Arizona-based Lasertel, are configured in arrays to repetitively produce short energy pulses that total a record-setting 3.2 megawatts in peak power. HILADS, which was an R&D 100 Award winner this year, draws power from the grid and incorporates novel technologies to drive the diode arrays with the required precision and to keep them cool. 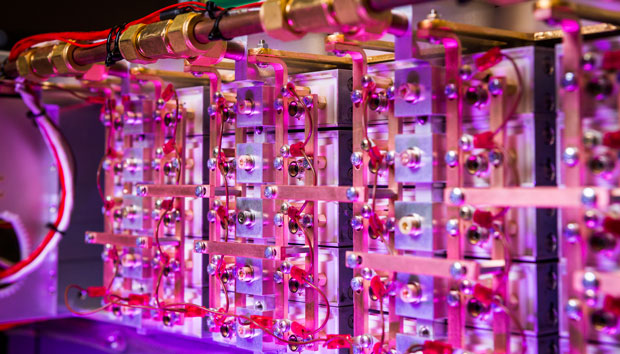 Probing the Wonders of the Universe

In FY 2015, Laboratory researchers participated in many exciting astronomical discoveries. The most Jupiter-like planet ever seen in a young star system was found by the Gemini Planet Imager at the Gemini South Telescope in Chile, which employs advanced adaptive optics developed at LLNL. This young cousin of Jupiter, only 20 million years old, is still hot and further study of the planet will provide clues about Jupiter’s formation and history. Another team found compelling observational evidence that supernova explosions are not symmetric. The Nuclear Spectroscopic Telescope Array (NuSTAR), launched into orbit in 2012 and operating with Livermore-developed x-ray optics, gathered the data. In addition, an LLNL astronomer contributed to the discovery of new stars being created by shockwaves resulting from the collision of two nearly dead galaxies.

Laser experiments conducted this year by LLNL scientists using facilities at Livermore, the University of Rochester’s Laboratory for Laser Energetics, and the United Kingdom’s Atomic Weapons Establishment are also helping to better understand astrophysical phenomena. Researchers reproduced the conditions that exist deep inside giant planet cores; created record numbers of electron–positron pairs, which are likely responsible for extreme astronomical events such as gamma-ray bursts; and studied an instability phenomenon thought to be the source of cosmic magnetic fields. (See , National Ignition Facility for additional scientific accomplishments performed at NIF.) In other work, an international team led by an LLNL researcher used an accelerator to measure a carbon fusion reaction at star-like energies. These data identify a unique chemical signature indicating the formation of the earliest stars in the universe.

LLNL researchers are pursuing experiments to re-create the physics of extreme astronomical phenomena, such as the gargantuan x-ray burst emanating from a supermassive black hole in the Centaurus A galaxy, about 12 million light years from Earth. The high-energy x rays (shown in blue) were detected by NASA’s Nuclear Spectroscopic Telescope Array, for which LLNL designed and tested key optics.

The Computing Grand Challenge Program at LLNL, now in its 10th year, nurtures the Laboratory’s enduring strength in predictive science through HPC simulations. The program provides participants ample time on Livermore’s exceptional unclassified HPC resources to perform groundbreaking science. Projects have ranged from the study of laser–plasma interactions to quantum Monte Carlo simulations of hydrogen at extreme conditions, and uncertainty quantification for climate modeling. Published in Physical Review Letters in May 2015, Livermore scientists and collaborators devised a new model of dark matter, which pervades the universe. The model is based in part on simulations run on LLNL’s Vulcan supercomputer. 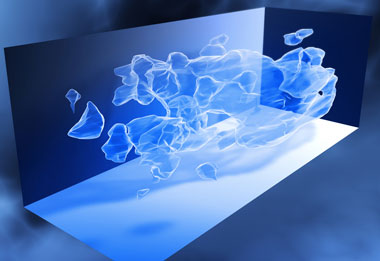 Simulations using LLNL’s Vulcan supercomputer contributed to the development of a new theory of dark matter by Laboratory scientists and collaborators. A 3D map illustrates the estimated large-scale distribution of dark matter, which has an observable effect on light from distant galaxies.

A study by LLNL and Kansas State University scientists found that the Lawrence Livermore Microbial Detection Array (LLMDA) could help identify diseases in the commercial swine industry because of the array’s ability to detect within 24 hours any bacteria or virus that has been previously sequenced. Using 180,000 probes, the current version of LLMDA can spot approximately 8,100 microorganisms. The research team was able to detect infectious swine diseases by identifying the multiple viruses and bacteria in the blood, tonsils, and oral fluid of swine and their farm environment.

Other researchers from LLNL and three other institutions assisted Cepheid, a San Francisco Bay Area biomedical company, in gaining an emergency-use authorization from the U.S. Food and Drug Administration (FDA) for its Ebola virus assay test. Under a work-for-others contract, Livermore scientists—experts in multiplex polymerase-chain-reaction-based assaying—tested Cepheid’s system against non-Ebola bacterial and viral targets to show that the assay would only detect Ebola. No live virus material was used in these research studies. 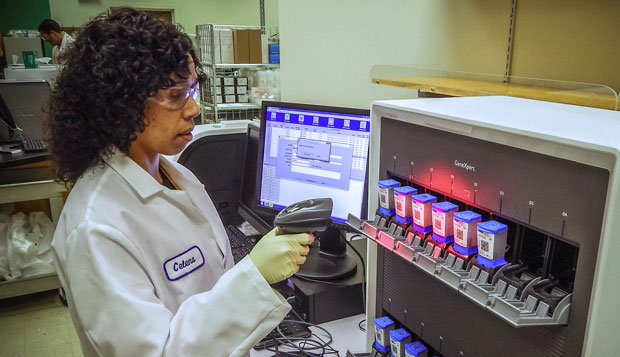 LLNL biomedical scientist Celena Carrillo conducts benchtop experiments in a collaboration between the Laboratory and three other institutions that assisted Sunnyvale-based Cepheid in advancing an Ebola virus detection test for emergency use.

Technologies developed at Livermore are increasingly impacting the U.S. economy. The top four companies started by LLNL scientists now have a market value of $11 billion. In FY 2015, Livermore obtained 97 new patents, asserted 77 new copyrights, and licensed 37 new technologies. Licensing income for the year totaled approximately $10 million. Through the Livermore Valley Open Campus, a partnership with Sandia National Laboratories/California, and other outreach efforts, LLNL is seeking greater engagement with U.S. industry and helping the local Tri-Valley area grow into a technology innovation center. The two laboratories were selected by DOE to participate in LabCorps, a pilot program to facilitate commercialization of technologies that have the potential to rapidly benefit society. In addition, the Laboratory is a corporate partner to i-GATE, a new-startup incubator located in downtown Livermore. The incubator’s first six companies have raised more than $8 million to turn game-changing technologies produced by LLNL and others into successful businesses. 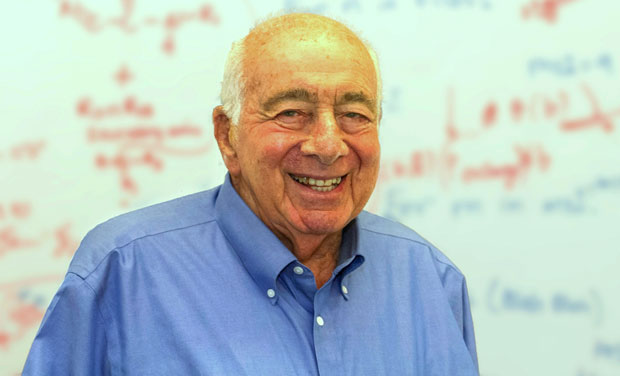 In August 2015, the Laboratory honored Dr. Berni Alder at a special symposium to celebrate his 90th birthday and his illustrious 60-year research career at Livermore. The day’s agenda featured invited speakers who reflected on the contributions of Alder, the creator of the discipline of computational molecular dynamics using the Monte Carlo technique. In 2009, Alder received the National Medal of Science, the highest honor bestowed by the U.S. government on scientists, engineers, and inventors. Driven by mission needs, LLNL remains a world leader in predictive simulation science at the atomic and molecular scale.