The 2013 Gordon Bell Prize for peak performance was awarded to scientists at ETH Zurich and IBM Research, in collaboration with the Technical University of Munich and LLNL for a bubbles simulation performed on the IBM BlueGene/Q Sequoia machine (see cover graphic ).

The American Nuclear Society recognized Livermore’s Jim Hammer as one of two recipients of the 2013 Edward Teller Award. Hammer is co-inventor of the fast-ignition approach to nuclear fusion energy. The Edward Teller Award recognizes pioneering research and leadership in the use of laser and ion-particle beams to produce unique, high-temperature and high-density matter for scientific research and for controlled thermonuclear fusion.

Steve Homann received a Secretary of Energy Achievement Award. He served as senior science adviser for radiological contingency planning for NASA’s Mars Science Laboratory Multi-Mission Radioisotope Thermal Generator team. Ahead of the launch of the Curiosity rover, which was powered by a “nuclear battery,” Homann led a team that deployed environmental monitors to prepare in case of a radiological event. The monitor network was linked via satellite to LLNL’s National Atmospheric Release Advisory Center, which was ready to provide emergency assessments if such an event were to occur.

Phil Pagoria received the 2013 NATO Munitions Safety Award for Technical Achievement in recognition of his discovery and development of the energetic molecule LLM-105, which has potential applications in enhancing the safety of nuclear and conventional weapons. The U.S. Defense Department’s Under Secretary for Acquisition, Technology, and Logistics nominated Pagoria for the award.

Award for Contribution to Intelligence Report

As part of a multiagency team tasked with contributing to a Special National Intelligence Estimate (SNIE), Chris Carson received an Intelligence Integration Award from the Office of the Director of National Intelligence. Carson and the entire team were recognized for “demonstrated professional integrity, enthusiasm, and dedication to producing a SNIE on a sensitive [weapons of mass destruction] topic, demonstrating deep substantive knowledge, great sensitivity to alternative analysis, and the highest standards of analytical tradecraft.” The award noted that the SNIE has had “a direct impact on foreign policy and national security.” 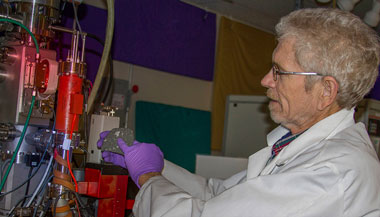 A new garnet mineral (Ca 3 Ti 2 SiAl 2 O 12 ) discovered in a refractory inclusion in the Allende meteorite has been named “hutcheonite” in honor of the Lab’s Ian Hutcheon, who has made numerous contributions to the study of meteorites and what they can tell us about the evolution of the early solar system. The new name was formally announced at the 76th Annual Meeting of the Meteoritical Society, held in the summer of 2013.

Regina Soufli and her team at LLNL were awarded the 2012 NASA Group Achievement Award for “outstanding designing, building, and operating of the science investigations” of the Solar Dynamics Observatory, which from its orbit around the Earth, studies the Sun’s interior and atmosphere.

A team of LLNL employees won first place in Tracer FIRE 5, an NNSA-wide cybersecurity competition that brings together teams from national laboratories and the private sector for a three-day, around-the-clock trial. The Laboratory also won a 2012 U.S. National Cybersecurity Innovation Award for a strategy by which multiple DOE laboratories and sites improved their defense against persistent threats through the real-time sharing of reputation data in a master block list.

Climate scientist Stephen Klein was one of the inaugural recipients of the American Geophysical Union’s Ascent Award “for elucidating the role of clouds in climate change and the fidelity with which climate models simulate clouds.”

Frederico Fiuza (shown), a Lawrence fellow at LLNL, was one of three recipients of the Ph.D. Research Award from the Plasma Physics Division of the European Physical Society. The Ph.D. thesis of Michael Kruse, a University of Arizona graduate student who spent three summers studying at LLNL, was chosen for publication in the Springer Theses series of publications.

Physicist Mark Rowland was named a senior member of the Institute of Electrical and Electronics Engineers. Rowland has worked in radiation detection for much of his career at LLNL and led teams that developed two instruments that have been commercialized to inspect cargo. One instrument—the Detective—was sent to Japan following the Fukushima nuclear incident to calibrate aerial measurement systems. 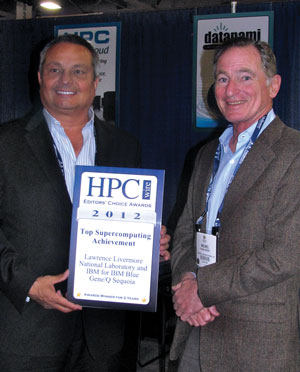