During FY 2014, a total of 191 shots on target were fired at NIF, including 156 shots for stockpile stewardship: 74 fusion-ignition and 82 high-energy-density (HED) science experiments. Seventeen additional experiments explored fundamental science and supported other national security applications. NIF is serving as a highly productive cornerstone of stockpile stewardship, providing valuable insights into the nature of the universe, and advancing the prospect of laser fusion as a carbon-free energy source.

As reported in February 2014 issues of Physical Review Letters and Nature, experiments at NIF clearly demonstrated “self-heating,” a mechanism needed to achieve ignition and sustained fusion burn. The shot on March 4, 2014, imploded a tiny cryogenically cooled deuterium–tritium capsule and broke the NIF record for number of neutrons produced (9.6 × 1015 neutrons). Alpha particles (helium nuclei) from fusion reactions further heated the plasma in a central hot spot and produced more than half of the total fusion yield (27 kilojoules). The fusion yield was considerably more than the energy imparted to the imploding deuterium–tritium fuel.

These successful shots are part of the “high-foot” campaign. The “high-foot” laser pulse is shaped in a way that reduces hydrodynamic instabilities and breakup of the imploding shell; however, overall compression in the implosion is less. Experimental results are remarkably close to simulations, which is important for understanding and improving performance. Other specialized experiments are designed to better characterize the time-dependent shape of the imploding capsule, optimize the shape and materials used in the hohlraum, and study the mix of fuel and capsule material during the implosion. In addition, the first experiments were performed using alternative target capsule materials: high-density-carbon (diamond) and beryllium.

In FY 2014, campaigns of HED science experiments at NIF explored wide-ranging physical phenomena central to stockpile stewardship. Altogether, 86 HED shots provided valuable data about the properties of materials at extreme conditions, the interaction of matter with intense radiation, and hydrodynamic turbulence and mixing. These issues are critical to understanding nuclear weapons performance and improving the predictability and results of fusion-ignition experiments. As an example, shots using tantalum foils tested an experimental platform to characterize the strength of high-Z (high-atomic-number) materials at high pressures and low temperatures by measuring the growth of hydrodynamic instabilities with x-ray radiography. Experiments at 5 million times Earth’s atmospheric pressure (5 megabars) with high-Z material are planned for FY 2015.

Exploring the Universe at NIF

As reported in the July 17, 2014, issue of Nature, scientists for the first time have experimentally re-created the conditions that exist deep inside giant planets. The study focused on carbon, which has an important role in many types of planets within and outside our solar system. Using NIF, a team from the University of California, Berkeley; Princeton University; and LLNL squeezed diamond samples to 50 megabars—comparable to the pressures at the center of Jupiter and Saturn. The laser intensity as a function of time was carefully tuned to compress the material without shocking and heating it. Diamond is the least compressible material known; yet, researchers were able to squeeze it to a density greater than lead at ambient conditions.

Planning, scheduling, and efficiency changes enhanced productivity and resulted in a continuous increase in the number of experiments NIF conducted in FY 2014. In the fourth quarter, the weekly average was 6.9 laser shots with targets—more than double the 2.8 shots per week achieved in the first quarter. For the fiscal year, the NIF team completed a total of 191 target experiments (those mentioned above plus 18 diagnostics and systems qualification shots) compared to a budget-constrained original planned total of 150.

The implemented improvements greatly benefited from the efforts of a national team of NIF collaborators and sponsors that examined NIF operations in detail. They conducted a congressionally mandated 120-day study to identify ways of increasing the NIF shot rate over three years at constant annual funding and, ultimately, recommended about 80 specific actions. The NIF team adopted a model used successfully at the OMEGA Laser Facility at the University of Rochester and now shoots around the clock for five days, followed by 48 hours of maintenance. Other changes included using “mini-campaigns” designed to minimize facility changes and implementing the award-winning “Formula One” fast-turnaround operations model (see Management and Operations). 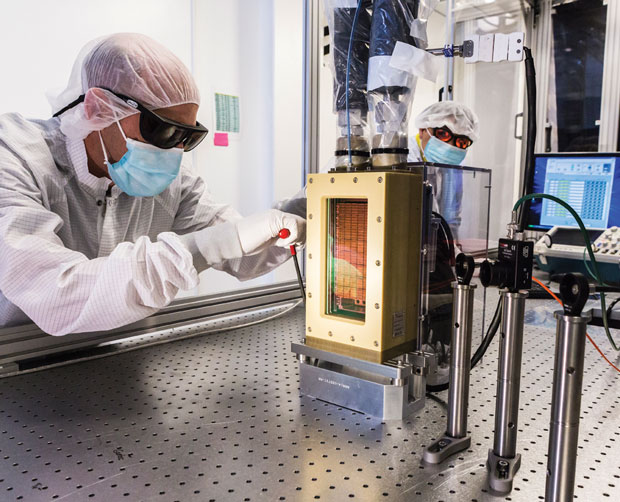 LLNL is developing the High-Repetition-Rate Advanced Petawatt Laser System (HAPLS) for the Extreme Light Infrastructure Beamlines science facility under construction in the Czech Republic. A major advance in laser technology, HAPLS is designed to reach one petawatt (1015 watts) of power in ultrashort pulses ten times per second. Key system components are the diode-lasers that deliver 3.2 megawatts of light to pump the HAPLS laser medium. The diodes (shown) consist of four arrays with each array having 45 laser diode tiles.

The first tests exploring system-generated electromagnetic pulse (SGEMP) were performed on NIF in FY 2014. Conducted in partnership with Sandia National Laboratories and the United Kingdom’s Atomic Weapons Establishment, these experiments gathered data to validate simulation models for assuring that critical systems are designed to withstand SGEMP effects. In addition, LLNL is developing diode-pumped alkali laser technology for directed-energy applications for the Department of Defense. Significant progress has been made on developing and integrating high-performance laser diodes. Integrated laser experiments reached record power levels in FY 2014.