An international team of scientists, including researchers from LLNL, published a multi-year study that narrowed the bounds of uncertainty in the effect increased atmospheric carbon dioxide (CO2) would have on Earth’s climate. Estimates of the global equilibrium temperature have been between 2.7–8.1˚Fahrenheit higher for a doubling of CO2 compared to preindustrial levels. This comprehensive analysis of climate sensitivity concluded that the world would likely experience between 4.1–8.1˚F warming with a doubling of CO2 and that there would be less than a 5 percent chance of warming less than 3.6˚F. Livermore’s contribution included dealing with climate feedbacks that amplify or diminish warming trends and cloud feedbacks, in detail, which are the greatest source of uncertainty. LLNL scientists are recognized leaders in cloud processes research, including their diagnosis with observations, their parameterization and evaluation in climate models, and their response to climate change. 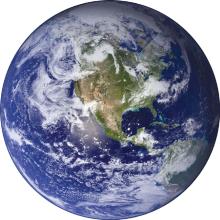 Working in a deep underground tunnel at the Sanford Underground Research Facility, a team of DOE researchers, the Enhanced Geothermal Systems (EGS) Collab, is learning how to convert heat from dry rock into clean, low-carbon-emitting power. A borehole injects pressurized water, which migrates deep underground through rock fractures to another borehole that brings the heated water to the surface for energy generation. DOE’s Frontier Observatory for Research in Geothermal Energy (FORGE) is a test bed for studying key mechanisms in creating and sustaining fracture networks in rock formations that would be needed for a viable large-scale EGS. As part of the EGS Collab effort, LLNL is providing expertise in high-performance computing (HPC) to design experiments, build integrated data sets from observations, and perform simulations that compare experimental data to models of fluid-induced fracturing of the subsurface rock. Livermore is also contributing “edge computing” to the project—distributed computing and data storage made available closer to the users’ location for more timely access to data.

FORGE is one of many ongoing technology development projects under way at Livermore to mitigate climate change and to capture, sequester, and convert CO2 into useful products and fuels. LLNL’s Carbon Initiative aims to identify and develop solutions to enable global-scale CO2 removal from the atmosphere and hit global temperature targets.

Laboratory researchers and collaborators have designed a new process, based on a naturally occurring protein, that could selectively extract and purify rare earth elements (REE) from low-grade sources. REEs are essential for U.S. competitiveness in clean energy industries because they are used in many devices important to a high-tech economy and national security. The protein, lanmodulin, enables a one-step extraction and purification of REEs from complex metal mixtures, including electronic waste and coal byproducts. Researchers have also developed a scalable biosorbent material—microbe-embedded polymer beads—that could be used to recover REEs from end of life products that use neodymium magnets. The microbeads selectively adsorb REEs and can be reused after desorption.

In FY 2020, DOE announced two rounds of award-winning projects under the High Performance Computing for Energy Innovation (HPC4EI) Program. Led by LLNL for DOE, the program supports public–private collaborations that leverage the HPC capabilities at the national laboratories to help U.S. industry improve energy efficiency and streamline manufacturing processes. These awards include funding for six projects that are led or co-led by Livermore researchers working with industry partners. Three projects combine Laboratory expertise in artificial intelligence and HPC simulations. One, in particular, will use an experimentally tested data set of roughly 100 molecules and molecular dynamics calculations to train an algorithm that predicts corrosion inhibition performance of organic molecules—greatly reducing the experimental time needed to develop products. Other projects aim to lower the cost of synthetic fuel production, reduce energy consumption and improve glassmaking, and further the development of next-generation lightweight high-strength steel.

In a groundbreaking study, LLNL scientists identified a robust suite of technologies to help California become carbon neutral by 2045. Getting to Neutral: Options for Negative Carbon Emissions in California thoroughly assesses the advanced carbon reduction technologies now available, their costs, as well as the tradeoffs necessary to reach the state’s decarbonization goal. The study team identified a portfolio of approaches for achieving greater than 125 million tons per year of negative emissions for California by 2045. They also evaluated the scope of state and private investment to best achieve the goal. The report, funded by the the Livermore Lab Foundation with grant support from the ClimateWorks Foundation, serves as a resource for policymakers, government, academia, and industry.

Membrane-based systems have great potential in applications such as desalination, pharmaceutical recovery, and waste treatment. One team of LLNL researchers has created carbon nanotube pores that self-insert into membranes to form artificial biological water channels with enhanced flow and strong ion rejection. These tiny pores are just 0.8 nanometers in diameter. In comparison, a human hair is 60,000 nm across. Another team created the largest defect-free membrane to date with high density, single-walled nanotubes, which were grown on 4-inch silicon wafers.