Laboratory researchers are developing new deep-learning and high-performance computing algorithms that sift through massive amounts of data for evidence of nuclear proliferation activities. The effort, called Advanced Data Analytics for Proliferation Detection (ADAPD), is aimed at accelerating the pace of nonproliferation analysis and scaling it to much larger data sets than humans could search manually. By handling the initial screening, the system makes evaluating evidence of proliferation activities much more manageable for analysts, who are relieved from examining millions of images and hundreds of videos.

ADAPD pushes the limits of deep learning by using neural networks to “map” images, text, and video into a feature space. All relevant data are categorized based on how they relate to the processes involved in building a nuclear weapon. An especially powerful aspect of ADAPD is its ability to find conceptually related data that very often lack key words. To tackle this challenge, the LLNL team developed new “self-supervised” algorithms that enable the neural network to automatically learn what features are important to “see” or “read” for each type of data. 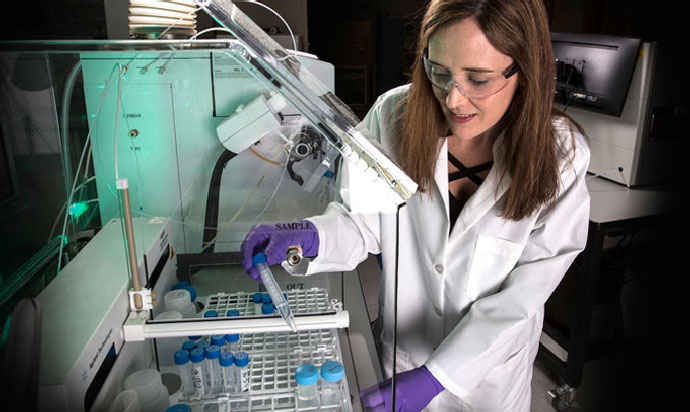 An accident or cyberattack on one component of the nation’s power grid could create cascading problems for huge segments of the grid. Livermore’s Skyfall is a cyber–physical test bed designed to realistically model the grid’s behavior by combining high-performance computer simulations with a full-fledged power substation that behaves as if connected to an actual power grid. The computer feeds the substation a set of conditions such as voltages and currents that are identical to signals that would be received in the real world if a system were under attack. The researchers watch how the Skyfall substation responds and then extrapolate the results across the wider network. Resulting high-fidelity simulations provide a realistic view of system behavior during an attack from beginning to end—pointing out ways to increase the resiliency of the nation’s power grid.

Forensic Scientists Earn an “A”

Despite a worldwide ban, chemical weapons pose a threat to global security. Since 2003 Livermore’s Forensic Science Center (FSC) has been one of only two U.S. laboratories (and one of only 20 worldwide) accredited by the Organisation for the Prohibition of Chemical Weapons (OPCW). LLNL earned its eighth consecutive “A” grade in its yearly OPCW proficiency test. This test required identifying six substances hidden in extremely complex chemical matrices. More recently, the Laboratory served as the grader for a test.

The FSC supports chemical, nuclear, and biological counterterrorism activities and also conducts research in new types of forensic methods. For example, FSC scientists developed capabilities to use proteins from bones—as well as hair— for identifying human remains recovered from challenging environments. The advance is a new tool for the forensic science community and a complement to DNA analysis, the gold (but fragile) standard for human identification.

Laboratory researchers have made significant progress in their development of a “brain-on-a-chip.” Their goal is to use the technology to test and predict the effects of biological and chemical agents, disease, and pharmaceuticals without the need for human or animal subjects. The device, which is part of Livermore’s growing iCHIP (in vitro chip-based human investigational platform) project, simulates the human central nervous system by recording activity from multiple brain cell types grown onto microelectrode arrays. The team successfully performed tests on a chip with four distinct areas, representing three subregions of the brain and the cortex. The researchers were able to observe how the cells interacted over time through bursts of electrical energy.

A Livermore team developed a planning resource to assist local governments in determining the best actions to take after the detonation of an improvised nuclear device (IND). The web-based IND City Planner Resource (iCPR) provides scientifically based IND effects information for 60 U.S. cities. It leverages LLNL’s computer science expertise and the modeling system developed at the National Atmospheric Release Advisory Center (NARAC), which serves as DOE’s plume-modeling center for real-time and predictive assessments of nuclear, radiological, chemical, biological, and natural emissions. The interactive system combines geographic information on building types with protection factors developed by NARAC to estimate at the census block level the protection provided by buildings. The iCPR tool also features animations that show how affected urban areas evolve over time from detonation to one year later.

An LLNL-developed biomedical technology that can deliver vaccines and drugs inside the human body has been licensed to a company in Michigan. It is to be used for use in cancer treatment. Nanolipoprotein (NLP) particles—water-soluble molecules that resemble the human body’s good cholesterol—are used to deliver synthetic peptides that enter the body’s lymph nodes and activate T-cells. The activated T-cells then circulate and destroy cancerous tumor cells. Chemist Paul Hoeprich (left) and biologist Nick Fischer watch as LLNL biologist Sean Gilmore loads a solution of NLP particles into an injection vial.