Supporting stockpile stewardship through a wide range of experiments and pursuit of fusion ignition; and operating as a national user facility for high-energy-density (HED) science

In FY 2021, the National Ignition Facility (NIF) maintained fully scheduled shot-weeks while managing safe operations according to established COVID-19 protocols and procedures. The NIF team completed 368 shots during the year that supported stockpile stewarship priorities, including properties of plutonium under extreme conditions, nuclear survivability, fusion ignition, and others.

Diagnostics in Support of the Fusion Milestone

NIF’s highly specialized and sophisticated measuring instruments—referred to as diagnostics—were integral to the success of the record-setting inertial confinement fusion (ICF) experiment conducted on August 8, 2021 (see At the Threshold of Fusion Ignition). About 20 diagnostics were used in the 1.3-megajoule shot and all performed well. Multiple complementary and redundant state-of-the-art nuclear, x-ray, and optical diagnostics gathered data. For example, fusion yield was measured by three independent diagnostics. Instruments provided time-integrated and time-resolved x-ray imaging. Three lines of sight were used for time-integrated neutron imaging, and neutron spectra measurements were gathered along six lines of sight. The 3D neutron imaging system (NIS), developed by researchers at Los Alamos National Laboratory (LANL) in collaboration with LLNL colleagues, was particularly valuable. NIS data provides a 3D analysis of the neutron-emitting hot spot and the surrounding deuterium–tritium (DT) fuel, an important measure of the quality of the implosion. In addition, 48 real-time nuclear activation detectors were used to infer DT fuel uniformity.

The multilaboratory National Diagnostic Working Group guides the development of state-of-the-art instruments for all the HED science laboratories funded by NNSA. Diagnostics at NIF, which are used for a wide variety of HED experiments, have benefited from decades of experience and ongoing collaborations with national and international partners, including LANL, Sandia National Laboratories, the University of Rochester’s Laboratory for Laser Energetics, General Atomics, the Massachusetts Institute of Technology, the Nevada National Security Site, the University of California at Berkeley, and the atomic energy agencies in the U.K. and France. A priority moving forward is the upgrade of several diagnostics to support even higher neutron yields that are expected as future experiments build on the success of the August result.

HED science experiments at NIF in FY 2021 provided crucial data to support stockpile modernization and helped scientists study wide-ranging physical phenomena central to stockpile stewardship. Scientists investigated the properties of materials at extreme conditions, hydrodynamics and the behavior of shocks, and material mixing. The data are used to improve and validate 3D simulation models of weapons performance. Of note, researchers fired the first-ever NIF shot to study a high-explosive (HE) sample in FY 2021. The shot was the first in a series of experiments to help scientists unlock the mysteries of HE chemistry. NIF has the unique capability to shock compress a sample with a 60-nanosecond-long laser pulse and follow it with two x-ray probes to view resultant product formation. These shots will greatly expand the Laboratory’s HE experimental toolbox and provide data to critically evaluate the predictive computational capabilities of LLNL’s world-class thermochemical code, Cheetah.

Experiments at NIF provide unique opportunities to explore the conditions found at the cores of giant planets and dwarf stars as well as energetic phenomena in the universe. In FY 2021, an international team of researchers led by LLNL and Oxford University studied carbon at pressures reaching 2,000 gigapascals (GPa), nearly doubling the highest pressure at which any crystal structure has been probed. Scientists have predicted several new structures of carbon that could be found above 1,000 GPa (2.5 times the pressure at Earth’s core and relevant for modeling exoplanet interiors). The NIF experiments surprisingly revealed that at 2,000 GPa carbon does not transform to any other predicted phase. Solid carbon retains its diamond structure far beyond its regime of predicted stability. In another effort, Laboratory researchers developed an x-ray source that can be used as a backlighter in experiments that probe conditions of extreme temperature, such as those at the center of planets. These tests, called extended x-ray absorption fine structure (EXAFS) experiments, can be performed at NIF over a wide range of materials and conditions that were not previously possible at any other facility.

Many NIF subsystems, designed with 1990s technology, are now over 20 years old. Obsolescence concerns and the need for refurbishment have resulted in degradation of some systems, and equipment-related delays are increasing. To assure that NIF continues to support its burgeoning role in stockpile stewardship through its 2040 design lifetime, the NIF team conducted a systematic review of the NIF enterprise. To sustain NIF operations, needs have to be met in three categories: refurbishment to address deferred maintenance; investments in updated equipment for selected systems; and improvements to increase productivity and reduce costs. The results are reported in a five-year NIF Sustainment Plan. 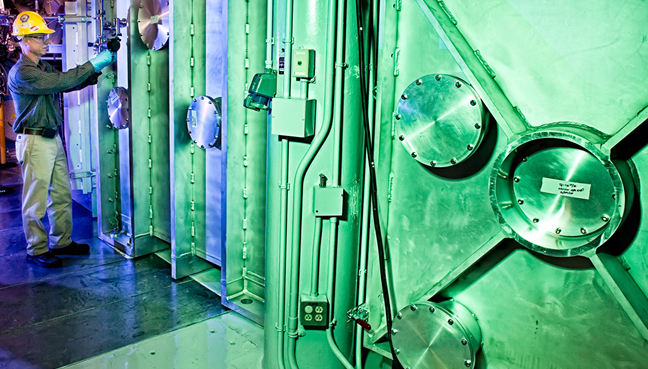 Under development, the Direct Laser Impulse project aims to provide a new NIF capability to test the survivability in space of vital strategic defense and weapon delivery systems near a nuclear explosion. In experiments, two NIF beams will be directed at a square-foot-size target system placed inside a large, unused compressor vessel (shown) located outside the target chamber. Vaporized material will blow off the surface and shock the target’s interior—perhaps causing system failure.