An Antidote to Nerve Agents

In work performed for the Defense Threat Reduction Agency, Laboratory scientists developed LLNL-02, a new, versatile antidote to counteract exposure to nerve agents. Chemical weapon nerve agents, such as Sarin, typically function by blocking the transmission of messages from the central nervous system (CNS), composed of the brain and the spinal cord, to the peripheral nervous system (PNS), which controls processes such as respiration. The brain’s natural protection, the blood–brain barrier (BBB), keeps potentially harmful molecules from entering and affecting the CNS but makes it difficult to get an antidote across the threshold. LLNL-02 is the first antidote able to cross the BBB and effectively protect the CNS and PNS.

LLNL-02 was discovered through the use of the Laboratory’s supercomputers combined with medicinal chemistry to test viability. Promising candidates required hundreds of simulations involving 5 quadrillion equations. In tandem, Livermore scientists synthesized selected compounds and tested them for BBB permeability to validate simulation results. In a highly iterative collaboration, the U.S. Army Medical Research Institute of Chemical Defense and LLNL showed that LLNL-02 is nontoxic and works as well in animal models as the “gold standard” antidote. Continued testing is underway.

Launched from Vandenberg Space Force Base in June 2021, the U.S. Space Force’s Tactically Responsive Launch-2 (TacRL-2) mission carried a payload designed and built in record time. Within four months of project initiation, LLNL researchers provided a three-mirror reflective telescope and sensor for the payload, which they designed, tested, and delivered to collaborators for system integration. Earlier in the year, two Laboratory-designed space telescopes had been launched into orbit on a 25-pound nanosatellite. GEOStare2, developed in collaboration with Tyvak Nano-Satellite Systems, has taken thousands of images of Earth and space.

TacRL-2 was the first mission led by the Space Safari Program within the U.S. Space Force’s Space and Missile System Center. With this mission, the Space Safari Office successfully demonstrated their end-to-end approach to tactically responsive missions—an approach that seeks to introduce speed, agility, and flexibility into the space enterprise. Together, the team, which included LLNL, Space Dynamics Laboratory, and the Air Force Research Laboratory, delivered a complete technology demonstration satellite for launch in 11 months, significantly faster than the two to five years historically required.

Other FSC researchers found a biomarker that might be used to confirm use of chlorine gas as a chemical weapon. Chlorine gas disperses so rapidly that evidence of its release can be hard to find. The team exposed Aegilops tauschii, a type of grass native to parts of Asia, including Syria, to chlorine gas at various concentrations over a range of durations. They isolated proteins from grass tissue and found chlorine-containing compounds, including a promising molecular biomarker candidate­— 2,4,6-trichlorophenol—which the plant does not make. This biomarker is a likely indicator of chlorine exposure.

In FY 2021, despite the pandemic, LLNL made significant progress to improve detection and monitoring of nuclear proliferation activities. The Low Yield Nuclear Monitoring (LYNM)/Physics Experiment 1 (PE-1) venture, led by Livermore, completed a number of important project milestones. This work included tasks related to mining operations at the Nevada National Security Site, experiment design reviews, and creation of a detailed fielding schedule that culminates with PE-1 (planned for FY 2023). The LYNM experiments are designed to strengthen U.S. capabilities to detect and characterize low-yield and evasively conducted underground nuclear explosions. 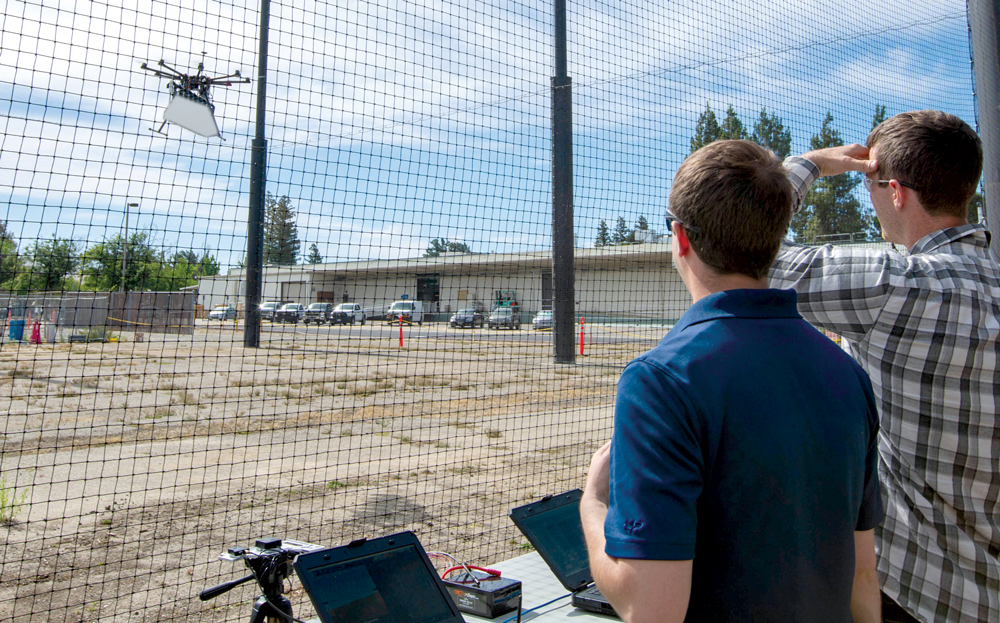 Researchers in LLNL’s collaborative autonomy group are shown flight testing a drone under the netting of the OS-150 Robotics Laboratory. The 50-foot-tall, 8,000-square-foot enclosure serves as a proving ground for autonomous drones, vehicles, and robots of the future. In projects for the Department of Defense, the group is working to develop “swarms” that can collectively gather data, make real-time decisions, and complete tasks deemed too hazardous for humans to perform.